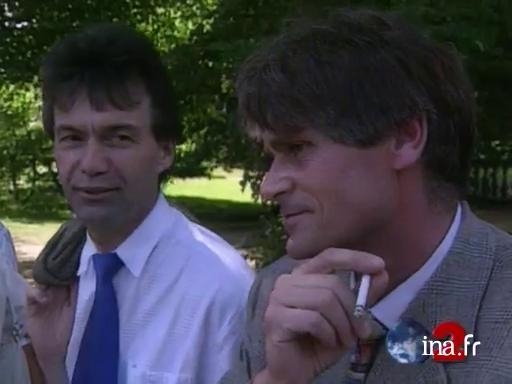 Report on the 10th edition of the Documenta, the major contemporary art exhibit organised every five years by the city of Kassel since 1955. Presentation of the works of the invited artists and interview with Catherine David, the commissioner of this edition, who explains her decision to not include paintings this year. Comments by visitors on the animated installation A home for the pigs and the men.

The popular Documenta knows how to make itself desired: organised only once every five years in the German town of Kassell (Hesse), the exhibition is dedicated to contemporary art and brings the works of hundreds of artists into the streets by dividing the different places and quarters of the town. Over a hundred days, over 600,000 visitors are invited to reflect on the meaning of the works or let their emotions react by discovering the different installations in situ.

Created by the painter and professor Arnold Bode in 1955, with the mission of uniting German society with modern art, the Documenta has continued, over the years, to affirm its international dimension and inviting artists from all over the world. Proof of its permanent programme renewal, each edition is entrusted to a different person: the French Catherine David in 1997, the Nigerian Okwul Enwezor in 2002, the German Roger M. Buergel in 2007.

It has reflected artistic movements for over 50 years. The Documenta has witnessed the great debates and controversies and was sometimes itself caught up in them, like in 1968, in the wind of social and political events.

A small detour through the centre of Germany for the Documenta in Kassel, a giant contemporary art exhibit that takes up all of the city. A French woman, Catherine David, is in charge of organising this 10th edition. Report from our permanent correspondent, Jérôme Cathala.

A few travellers who are arriving in the Kassel train station are sometimes taken by surprise. These flowers and wild herbs that are growing on one of the railroad tracks make things appear chaotic. But you have to get closer to understand that it's an installation by the Austrian artist, [Loïs van Berger]. And it's our first contact with the Documenta, the contemporary art exhibit organised by the city of Kassel every 5 years since 1955. An exhibit integrated into the city, that you can visit with guide in hand, so as to not miss the works of the 120 artists that are invited this year. For example, in an underground pathway, this picture by America's Jeff Wall, or this short video clip by a young German artist. Many pictures, then, in all forms, but as for paintings, they remain absent. This was the decision of Documenta's director, Catherine David.

The notion of the Beaux-Arts has been left aside a bit, neglected, which disappointed certain people, but it seems to pretty much be in line with what today's artists are trying to achieve.

No matter what critics say, Documenta attracts crowds: 600,000 visitors 5 years ago. An audience not necessarily made up of experts but that's happy to become initiated in the pleasures of contemporary art, like this Atlas by Germany's Gerhard Richter, or, even more surprising, these mini-caravans whose interior decorations are all different. This animated installation was also very successful. Its title: A house for pigs and men.

The question is, to find out which picture it is. Is it our reflection in the mirror, at the end, or is it the picture, it might be us as seen by those who are there, in front, the pigs. In any case, I think that it's a nice picture.

To sum things up, the Documenta of Kassel, it's a way to go for a walk through contemporary art. The exhibit is open until the end of September.