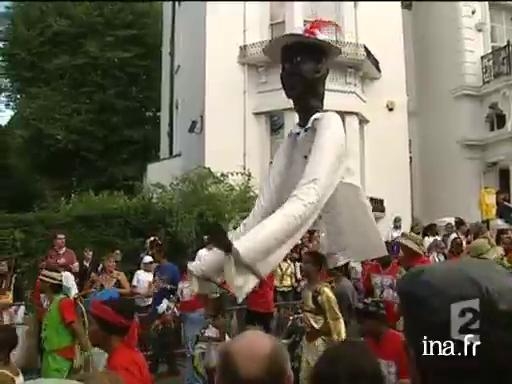 Report on the famous Notting Hill carnival, in London. This colourful and festive cultural event, with its Caribbean rhythm, attracts many tourists every summer.

Millions of tourists gather every year, the last weekend in August, for the very popular Notting Hill Carnival to join the crowd that celebrates Caribbean culture in the British capital.

Getting its name from the west London quarter where there is a large population of resident immigrants from Cuba, Trinidad..., the carnival was created in 1965 by a social worker, Rhaune Laslett. Worried by the tensions between the different ethnic groups, she came up with the idea of a festive gathering that will allow the different communities to reunite and ease relationships, to the sound of percussions and rhythms from soca, calypso, reggae, ragga and other musical genres played out through powerful sound systems. Child parades, dance competitions, culinary specialities and traditional costumes complete the picture of the festival which has not however, managed to make people forget the social inequalities and acts of racism which often strike the city and shake the certainties (as elsewhere) of the immigrant integration model.

In their absence, the Notting Hill Carnival remains one of the biggest touristic and festive gatherings of Europe.

After Rio, the biggest carnival in the world, it's in England, in the pretty neighborhood of Notting Hill, which was made famous by cinema. A colourful carnival that represents the richness of the various cultures. Karine Comazzi, Roy Connelly.
(Music)

Trinidad, Jamaica, Dominican Republic. Before being a stylish London neighborhood, Notting Hill welcomed Caribbean immigrants at the end of the 1950s. Gladys was in that first wave of immigrants.

I don't remember my first carnival anymore. It was 20 years ago, maybe more. I was young, I could dance. Now, I can't anymore.

It's an event where there are people from different social standings and it creates a relationship between the communities.

Wanting and doing things together. The theme for the 2006 edition wasn't chosen randomly. The organisers wanted to pay tribute to the capital of cultural brewing.

London is in the midst of a complete change. It's very multicultural. In 10 years, most of London's population won't be white.

The biggest crowd of carnival visitors: the French, the most numerous, the most convinced.

The first thing I liked was this ethnic mix of all the races and colours of this city. And the fact that everything is harmonious.

You have to come all the way over here to party.
(Music)

This 42nd edition of the Notting Hill carnival already promises to be a success, an encouraging sign, at a time when England is interrogating itself on its multicultural model.