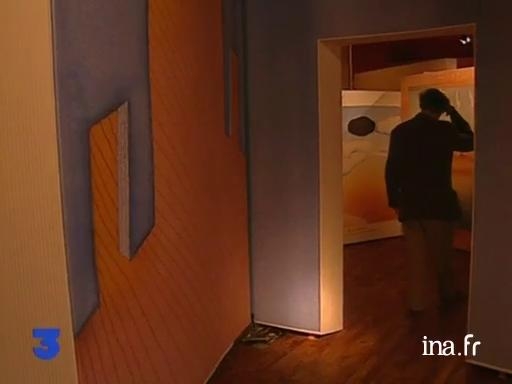 Visit of the Folon Foundation in the castle of La Hulpe, south of Brussels, which features 300 major works of Jean-Michel Folon, a Belgian painter, drawer and sculptor. The artist opened this foundation to share his work with the general public; all proceeds collected there will be donated to a cause that he holds dear, autism.

From 1975 to 1984, gentlemen in raincoats presided over a backdrop of melancholic music, marking the end of the Antenne 2. Poetic and gentle, the work of Folon (1934-2005) branched out into other areas, from animation to sculpture, passing by stained-glass but it can be characterised especially by his watercolours that bring birdmen to the fore. Enigmatic figures wearing hats, they can't help but evoke the work of Belgian surrealist René Magritte.

Like many others in this era, Jean-Michel Folon abandoned his studies in Brussels in 1955 to be an artist in Paris. But the little interest he received for his drawings made him turn to the United States. His career as an illustrator thus began and he signed among the most beautiful pages of theNew Yorker, following in the footsteps of Saul Steinberg who he drew some influence from.

The artist Folon, who loves birds and probably shares the same dreams as Icare, is the author of little flying men which made him famous. He just opened up a foundation at the entrance to Brussels for a cause that is dear to him. Nathalie Hayter, Laurence Houot.

It's an enchanting location, outside of the city, outside of time. Here is where Jean-Michel Folon sketched his first birds. And it's in this old farm that he just set up his foundation. An entire life of colours and poetry, thirty years of creation. Man and nature depicted in a thousand and one ways.

For the last thirty years, I've kept most of my work, three hundred hours, and the opportunity to store it here, I would almost say forever. It was basically a way to return to my childhood.

A far away childhood, of course, but that Folon, through his work, has refused to forget. In this way, his images make you dream, and a visit of this museum is as playful as it is poetic. A voyage through time, dreams and space, and where we can learn a bit about the artist, and we especially discover what's deep in his heart. His little boy, not quite like the others.

I don't know if my son is autistic, because we always have to give things a name, but I think that he basically always hides in his head all the time. But at the moment, I think that all artists are autistic. Since we spend our lives hiding inside of ourselves.
(Music)

All profits from the Folon Foundation will be redistributed to several associations that assist the handicapped. In this way, from stamps to posters, from sculptures to watercolours, the artist remains true to himself. Each one of my images, he says, is a page from the book of my life.