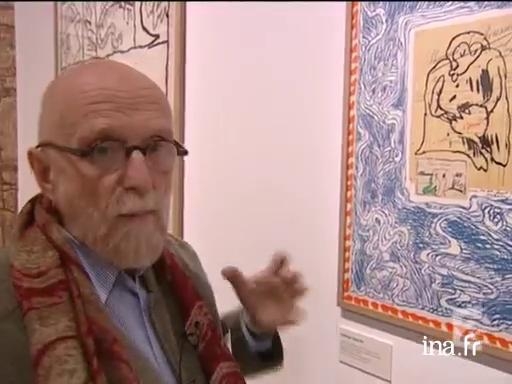 Report on the exhibit dedicated to the drawings and engravings of Pierre Alechinsky, the printer and painter, at the Bibliothèque Nationale of France. The artist comments on a selection of his work with humour.

The Belgian painter with a prolific imagination, Pierre Alechinsky (1927, Brussels) has learned to appreciate collective work from his numerous encounters. Trained at the School of Architecture and Decorative Arts in Brussels where he learned illustration, printing and photography, he discovered the work of Michaux, Dubuffet and the surrealists in 1945 and befriended the art critic Jacques Putman. Four years later he met Dotrement and joined the CoBrA group which brought together Karel Appel, Pol Bury and Asger Jorn with whom he was particularly close.

Alechinsky thus developed a fantastic bestiary and a lightning stroke, spontaneous in portions of bright colours like venom spat on the canvas. He cast himself in the poetic wing of CoBrA, mixing writing and imagery. In the 1950s He worked with the Chinese painter Wallace Ting, travelling to Japan then to New York. This brought the introduction of calligraphy and action painting to his creations. Alechinsky painted chaotic shapes on the ground and traced narrative motives in China Ink on his frames, that he calls paintings with"marginal remarks".

As much a writer, he has published numerous books and with an often ferocious humour has illustrated texts by Michel Butor, Cioran and Tardieu.

To finish up, an exhibit. Alechinsky's drawings and engravings. Pierre Alechinsky was a printer before becoming a painter. From his previous profession, he kept the techniques. At the age of 78, he remains a very prolific artist. Isabelle Baechler, Olivier Robert.

A printing house of art, above all, it's the cyclical whistling of the machine that's in charge and that spits out a sheet after each pass over the stone. Pierre Alechinsky is at home here, in total confidence. Just a few lines to approve the work. With the left hand and then with the right hand, as an annoyed left-handed person.

Whenever it's a drawing, it's the left, anything written is on the right.

Everything plays out in harmony with the printer.

Pierre has an extremely precise eye and he will give me the instructions that I need to achieve the desired colour.
(Music)

As is often the case, America has given the Belgian artist recognition before Europe has. In the 1970s and 1980s, the United States had already dedicated several major retrospectives to him.
(Music)

He's the tireless 78 year old engraver that the Bibliothèque Nationale is exhibiting today, the illustrator of books by his friends, writers and poets, the artist from Brussels, adopted by France, with the sarcastic look, a paper dealer, who offers stories.

It's almost like a little script. There is a bill from the Rousset pharmacie where we see that Mrs. Machin bought mustard flour because her husband had a bad case of bronchitis. But this therapy was useless, since the following bill was already a bill for a casket, supplies, lining, padding and a copper plate.

Pierre Alechinsky, it's the fluidity of the brush going over the stone with thick ink. Work, always cradled by the purring of the machine.