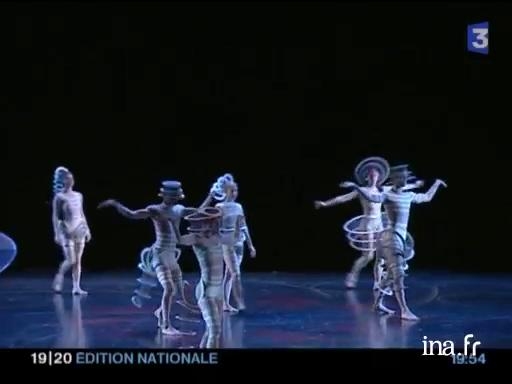 A report dedicated to the last part of the trilogy by choreographer Philippe Découflé, Tricodex. Commentary over images from the show and rehearsals at the Châtelet Theatre in Paris, mixed with interviews with Philippe Découflé, Sébastien Libolt, composer and Yorgos Loukos, director of the Lyon Opera Ballet.

Philippe Découflé was born in Paris in 1961. Trained in the circus in mime and contemporary dance, notably with Alwin Nikolais at the National Centre for Contemporary Dance in Angers and with Merce Cunningham, he became a performer in the companies of Régine Chopinot and Karole Armitage. In 1983, his showVague caféwas awarded at the choreographic awards in Bagnolet and the DCA company (Diversity, Camaraderie and Agility) was born. It was set up in the former electrical works of Saint-Denis in 1993.

Découflé produced fantasy universes of double jointed characters that borrowed from comic strips and Tex Avery, mixing dance, music, video, animations, optical illusions and original costumes created by his accomplice Philippe Guillotel. Preoccupied by the emotions of the audience, Découflé managed to make contemporary dance a popular art. He is one of the best-known choreographers in the world thanks to theDanse des sabots, created at a catwalk put on by Jean-Paul Goude for the bi-centenary of the French Revolution and thanks to his production of the opening and closing ceremonies of the Winter Olympic Games in Albertville, 1992.

He's one of the most creative choreographers of the last few decades, Philippe Descouflé is presenting the last part of his "Tricodex" trilogy at the Châtelet. On stage, the ballet dancers from the Lyon Opera and a series of scenes that are both aesthetic and zany. Nathalie Ether, Olivier Tiète.
(Music)

It starts out in darkness, somewhere in an imaginary Orient. Tentacles and mandibles, strange creatures. "Tricodex", it's a world that's mineral, animal and vegetable, all at the same time. To sum things up, it's Descouflé's gentle madness.

More than anything else, it's a series of scenes and images that are designed to provide you with dream material, and that are arranged in an order that only I can understand, I think, and which goes from germs to the movement of the planets. It goes from the very small to the massive.

Twenty-eight dancers and one hundred fifty costumes. "Tricodex" was inspired by an imaginary encyclopedia written by an Italian naturalist. A totally zany work, consecrated bread for Descouflé and for those that work with him.
(Music)

We really like working with metal, stone, wood, using it at first for its sounds and then, from those sounds, working on the rhythms, and then a melody comes on top which can be played by large instruments.

You really have to believe in it, all of these little things, when you do it on a large scale, it's marvellous.

And working under Philippe Descouflé's wing was a first for the Lyon Opera's dancers. A rather uncommon experience, just what you would expect from this choreographer.

We have sixteen nationalities, including people who came from Australia and China but that weren't necessarily familiar with his work. They thought they were joining a dance company, so they thought they were going to have a choreographer that was going t But, there are many studios where he only asks them for an eggplant, little by little, things worked out.

An eggplant and a carrot, please. So the recipe doesn't matter, as long as there's pleasure, the pleasure to discover a show that's full of surprises. Whether the purists like it or not, audiences were won over.