Isabelle Adjani about her passion for theatre 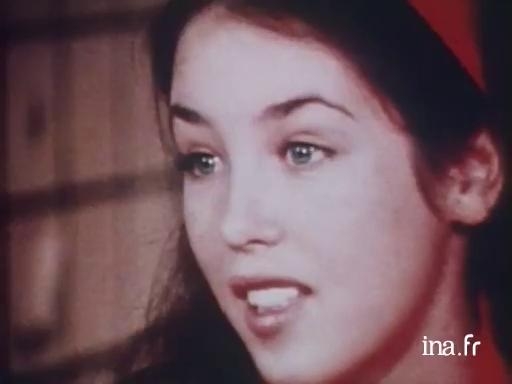 Interview with the young Isabelle Adjani, resident at the Comédie Française, while pursuing her studies at college. She speaks about her passion for theatre, about love, her failure at the conservatory and her actress training.

The first big cinema roles of Isabelle Adjani, that she got in the middle of the 70s (La Gifle by Claude Pinoteau, 1974, L'Histoire d'Adèle H. by François Truffaut, 1975) have since had a tendency of eclipsing her theatre debut.

If it was the screen that she played for the first time (at 14 years old in le Petit Bougnat by Bernard Toublanc-Michel, 1970), her discovery came in the theatre. While the regulars of the Comédie-Française often have to pass by the obligatory stage of the Conservatory, Adjani failed her entrance but joined it later at 17 years old, in 1972. Her performance in Ondine by Jean Giraudoux showed her off, and she shone in Mademoiselle Julie by Strindberg, L'Avare and especially L'Ecole des femmes by Molière. She left the Comédie-Française in 1974 to devote herself to the seventh at but got back on the stage in the role of La Dame aux camélias by Dumas, fils, directed by Alfredo Arias in 2000, then Marie Stuart in 2006.

Isabelle, is theatre a vocation?

If the vocation is certainty, then definitely not. I was very much attracted to theatre, but only after reading the plays that I was able to do since I got to secondary school. So I set foot in a theatre a bit late, well, it's late for someone who would have a very pronounced or precocious vocation for it. I was fourteen and a half years old when I first went to the theatre, and then this was followed by a chain of related events. It's a chain that formed independent of my will and that resulted in the fact that I now belong to the French. It's a theatre that I like, with which you get attached to, because we always end up, I mean, we end up, I'm starting to get attached to this place. And I love it, I love this theatre, I love the seats, I love the lighting, I love the caryatids, I love lots of things, I love the stage, I love the odours there are on the stage. I love things that are very close to me. Myself, I'm very happy, I'm in a troupe, and I have a fantastic relationship with everyone, because all of the people that I work with right now are people that I like and that I admire. And I think that admiration is the beginning of any friendship, of any possible connivance. And what about you, what do you think about your brilliant early days as a journalist, since we're always talking about me?

Isabelle, you're young and pretty and you're successful. But one day, that could end. Do you ever think about that?

Yes, I think that if I'm successful right now, it has more to do with the fact that I'm seventeen years old than the fact that I have real talent. To be quite honest, I'm not sure if I have any.
(Music)

I'm not going to choose between studying and acting because, first of all, I've almost finished secondary school, in any case, I'm taking the second half of my final exam, and second of all, I don't see why I can't dither about, since I've dithered about up until now. That doesn't cause any problems, as long as one part doesn't bring down the quality of another, and I really like completing things. I find that what I learn in philosophy is marvellously useful for what I do in theatre, because the plays that I do in secondary school, they're the same thing. There is reciprocity, there is a fantastic exchange.

The curator thought you were bad yet you wind up a salaried actor at the Comédie Française. That's a bit disturbing isn't it?

I showed up at the Conservatoire's exam, the admission exam, just like that, because I wanted to test myself, because I wanted to see what I was worth. In the end, I don't think that it was a test at all since there aren't any criteria in this profession. There's a sort of presence that you either communicate or you don't, a sort of exchange of wavelengths that takes place or doesn't take place. But I don't think that there are any talent criteria. When I work, and I'm learning as I work, since I'm learning my profession by acting, which is even more fantastic. The directors, the people with which I work nevertheless give me technical instructions. That's not what they base themselves on, it's not essential for me. But I'm realising that they're leading me in a very subtle way to do what they want, to get me to articulate the best I can, to move in a way that touches the audience more, to not always turn my back to the camera. In any case, there are lots of things that I need to learn, that are very important and I still do things just like everyone else.