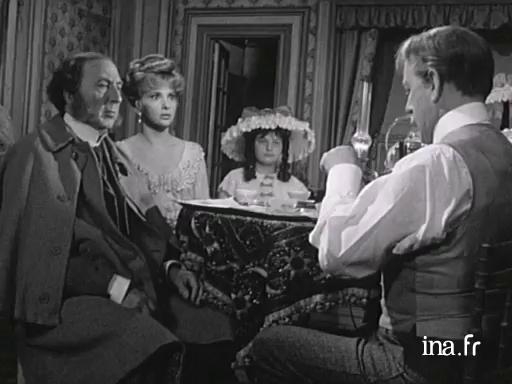 Conversation with Alec Guiness who shoots, alongside Gina Lollobrigida, the film Hotel Paradiso, an adaptation of a comedy by Feydeau, under the guidance of Peter Glenville.

When he's acting in front of Peter Glenville's camera at the Studios Saint-Maurice in Joinville-le-Pont for the adaptation of Georges Feydeau and Maurice Desvallières's Hotel Paradiso (1894), Alec Guinness already had a more varied theatre and cinema career than this "20 Years of Dark Humour" could suggest: from his first role with David Lean in Dickens's Great Expectations in 1946 to Jean-Claude Carrière's 1965 adaptation of French vaudeville, he has revealed himself to be "an exceptional poet of anonymity", according to the words of his British colleague Peter Ustinov.

An emblematic figure of the Ealing Studios and of their English-style comedies such as The Ladykillers (1955), he is able to interpret all of their roles. He went as far as playing 8 different characters in Kind Hearts and Coronets (1949). An "innocent" upper class man in Hotel Paradiso, he'll play, later on, a captive colonel during the war in The Bridge on the River Kwai (1957), Prince Fayçal in Lawrence of Arabia (1965), Adolf Hitler in Hitler: The Last Ten Days (1973) and even the Jedi knight in Star Wars (1977-1983).

Peter Glenville is a regular at the Feydeau. He has already directed an English version of Hotel Paradiso at the theatre which was a great success in London and on Broadway. It was as a theatre director that he became accustomed to being a strategist, maneuvering his cardboard characters around miniature stage sets.
(Silence)

But, let's leave the models for the Saint Maurice studios in Paris where real live characters are developing themselves.
(noises)

Here's Gina Lollobrigida as a little upper class woman of the XIXth century face to face with Alec Guiness who is rehearsing one of the film's scenes.

Alec Guiness, after having played dramatic roles for several years, you're doing comedy again. Which type of role do you feel best in?

It's very hard for me to answer in French so I'll speak in English, please. [English] Above all, I'm an actor, so it doesn't matter if I play in a tragedy or a comedy. All I know is, playing in a comedy is very hard work, harder than playing a role in a serious film.

For a certain time, you were the big specialist in dark humour. Nowadays, it seems like you're interested in comedies that are of the lighter variety. Is this the beginning of a new cycle for you?

[English] I'm a bit tired of dark humour but I don't think it's a return towards the past. For now, I'm dedicating myself to Feydeau's comedy. I think that with the innocence of this character, people will forget the bitterness of a few of the previous roles I played. [English]