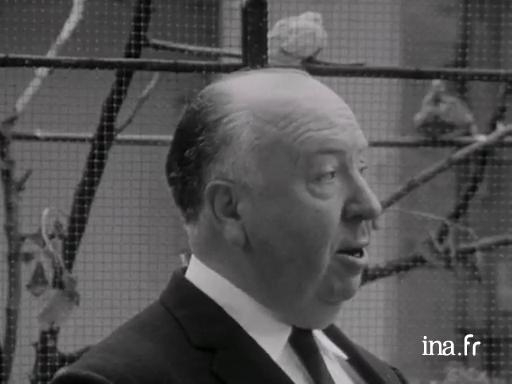 Alfred Hitchcock discusses his film The Birds in Paris's Jardin des Plantes: the film's theme, the technical methods used for the film, the classification of this film and its place within his entire filmography, and his project of a film with Grace Kelly.

In 1962, Alfred Hitchcock (1899-1980) brings to the big screen Daphné du Maurier's short story, The Birds, after three exceptionally dense films. Vertigo (1958), North by Northwest (1959) and Psycho (1960) entertained America - where the English director lived from 1940 on - and reinforced his status as the king of suspense, while seducing Cahiers du Cinéma magazine's young film critic who saw in his work, according to Truffaut's words, a true work that is "both experimental and appealing to the masses".

The Birds, publicly screened in 1963, will be Hitchcock's last undisputable masterpiece, combining the virtues of a breathless show, thanks to remarkable special effects, with a reflection on the bonds of love and family, whose Freudian backdrop undoubtedly was a preview of the following film, Marnie (1964). Once again, Hitchcock called on blond Tippi Hedren, as a replacement for Grace Kelly who became a princess, with which the filmmaker painfully resolved never to shoot again in future films.

You are familiar with this small fat man: the man that says "Boo!" to you in dark film theatres and immdiately scares you. Alfred Hitchcock, currently in Paris, is visiting the Jardin des Plantes as these images prove.
(Silence)

Hello Mr. Hitchcock. You are very interested in birds?

Naturally, since they provide me with lots of money.

You have birds that provide you with money?

My latest film is entitled The Birds.

What is the plot of this film?

The story concerns the fact that birds... The plot is as follows: birds are tired of being killed, plucked and eaten by mankind, so they decide to avenge themselves. One day, they group together and swoop down on the people's towns and villages.

Do they really kill people?

They try to, anyway. But in reality, they don't succeed. Afterwards, events occur that also suggest that things can be worked out peacefully. But in any case, the warning will have been harsh.

Did you use any special technique for this film?

Well, first of all, I had to train birds for this film: pigeons, blackbirds, even crows, and I used a new shooting process that allows me to shoot both actors and animals at the same time very easily.

Is this traditional Hitchcock, or, on the contrary, did you change your ways?

In reality, it's a quite different Hitchcock. Besides, every film that I make is different. North by Northwest was one thing, Psycho was another, The Trouble With Harry was once again different. Strictly speaking, this isn't a science fiction film, but something close. In addition, it's... how do you say?, romantic. [English]

When will we see it in Paris?

Next year I think.

In about six months?

Six months, six months. Because there's lots of work left in the lab.

One last question before we leave you, Mr. Hitchcock, which has nothing to do with this film. How is you project with Princess Grace coming along?

I had the novel, the plot, but I didn't have an actress for the role. But hopefully... I had an idea for a new actress.

So she'll no longer be doing the film?

No. The Princess? No, it's not possible. There's lots of turmoil. What is the word for "turmoil" in French?

Thank you very much.