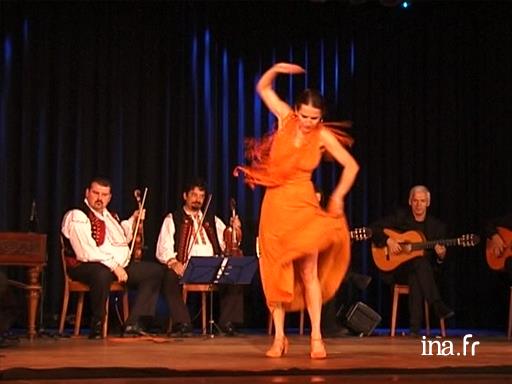 Report in Seville. The rebirth of traditional flamenco: an integral part of the culture of the Gypsies, which was banned under the dictatorship of Franco, experienced a revival before only recently becoming a commercial product. Commentary on the images by Paco Lira, owner of the tavern the Carbonería, Bettina Castano, dancer, and Felipe Luis Maestro, director of the International Flamenco fair.

1975 was the date chosen by José Manuel Gamboa to start his story of a history of flamenco [1]. This date sealed the end of the Franco dictatorship in Spain with the death of the General. It coincided with two major commercial successes for flamenco, which at the time were unimaginable. They were two rumbas composed by two guitarists: Entre dos aguas from the L.P. Fuente y caudal by Paco de Lucia (1947-2014) and Caballo negro featured on the record Sanlúcar de Manolo Sanlúcar (born in 1943). The guitar helped push flamenco into the globalized age. In 1981, with the creation of the Paco de Lucía sextet, the guitar became the main «voice» of the flamenco instrumental ensemble, reducing Flamenco song and dance to an accompanying voice or a colour, but still leaving them a few solos.

On Saturday, 9th August 1975, singer Antonio Mairena (1909-1983) announced his professional retirement at the 14th Festival de Cante Jondo Antonio Mairena, founded in 1963, in his hometown Mairena del Alcor. Its approach known as mairenisme consisted in capitalising on old repertoires. He collected endangered styles from singers. He then included them in his impressive discography. This would allow them to be used again professionally. It was accompanied by a discourse that defended the Gypsy songs to the detriment of flamenco music, which he considered decadent.

This major rescue of the singing tradition - cante -was part of a wider movement calling for its revival. In 1950, a programme about flamenco, "Cantares de Andalucía" was aired on the Radio Nacional de Espana in Seville, thanks to the initiative of Rafael Belmonte, the brother of one of the masters of bullfighting, Juan Belmonte, remembers Claude Worms [2]. The initiative to bring back old repertoires swam against the current of the time which preferred popular flamenco repertoires designed to reach large audiences. It first affected the personalities involved on a cultural level. Among them was Paco Lira (1927-2015), who opened "La Cuadra" in Seville in 1956. Subjected to the pressure of Francoist censorship, he moved around several times before permanently settling in "La Carbonería. In the 1970s, he imposed a libertarian spirit, defending the concept of singing without having to make compromises, and which was open to new experiences of Andalusian rock. The time had come for many young artists to get involved in politics.

This approach to the concept of singing still persisted at the dawn of the new millennium, as evidenced by the career of the singer Gaspard de Utrera (1932-2008), as well as one of the trustees of the repertoires at the casa cantaora [3] for Los Perrates, accompanied by guitarist Nîmes Antonio Moya (born 1966), adoptive son of Utrera and a disciple of the guitarist Pedro Bacán.

[3] A casa cantaora can be compared to a natural conservatoire; it brings together amateur and professional singers, playing a key role in the teaching of flamenco within the Gypsy community in Lower Andalusia and beyond, it was aimed at professional artists looking for sources disseminated outside the showbusiness world and the record industry. Some of them were at the origin of family branches specialized in the art of dance on a professional basis, the toque -instrumental guitar playing.

When the voice of pure flamenco takes hold of the Carbonería, it is almost a moment of grace. In this Sevillian Tavern, the soul of flamenco reappears every night. Paco Lira, master of the tavern, has devoted his entire life to flamenco. But he doesn’t sing, and he doesn’t dance; he swore to his father that he would never surrender himself to this popular art that was so despicable, so reprehensible in the eyes of Franco. He could not be the second son to defy the dictatorship, to end up in a camp, like his brother, a painful souvenir of a regime that lambasted the meaning of flamenco.

Under Franco, flamenco was banned, because it smelled too much of Arab and Jewish cultures. He wanted to see a flamenco that was a light source of entertainment, which borrowed some techniques from the true flamenco, like for example how to pitch your voice. And today, it is this flattened style, which is more or less being reborn in Spain.

Paco is a purist, a protector, a patron of the arts. For 50 years, there has always been a bar or tavern with a dance floor that beat to the rhythm of flamenco. A small piece of ground of artistic and intellectual resistance under Franco; the doors of this bar, which were both mythic and confidential, were always open to anyone who knew how to respect this living expression.
(Music)

Many artists, famous and anonymous, have been applauded in Paco’s house. Bettina Castaño from Switzerland also danced her first steps in his tavern. As an initiate of traditional flamenco, she is a member of the younger generation who has gained recognition in this difficult art; an art to which she remains loyal even if the scope of her choreographies have included other music.

If I dance the flamenco with the guitar, vocals, which are the basis of this style, I am dancing the flamenco. But if I dance, for example, to another type of singara music with violins, the zither, the double bass, it is of course another style of music; and in that case, I am not dancing flamenco, I am dancing something else.
(Music)

There is a term that fits my style, it is World Music, It is a music with ethnic roots including the blues, singara music from Afghanistan, Persian music and Indian music. I love those types of music, and what’s more, they inspire me so much that I want to dance to them and incorporate them into what I do.
(Music)

Flamenco, which originated in Gypsy families, was not originally used as a way to earn a living. It was an oral tradition, a way of expressing pain and joy, a history that was sung from one generation to the next. As soon as it left their homes, it took on another dimension, a commercial dimension. After two centuries of existence, flamenco has become a best-seller, an enticing shop window. Last October, Seville staged an international fair devoted exclusively to flamenco.

For this first edition, we managed to attract the greatest organizers of shows from around the world, those who are likely to promote flamenco at an international level. The goal was to sell shows that can be presented in far-off lands such as Japan, Australia and Canada. And then, we also try to promote all the accessories used in flamenco. Ranging from castanets to guitars,including fans, all of that - they are manufactured by our local craftsmen. And it represents a real industry, and we are trying to export it.

The reputation of flamenco no longer needs to be forged. From Seville to Cádiz, Andalusia promotes it as a asset, and Spain promotes it as a symbol of its culture. Foreigners flock here to see hands clapping together, and clicking castanets; the guarantee of a real show in the tablaos, the bars where we sing and dance, where all the colours of local folklore are mixed together at the risk of selling a little bit of the soul of pure flamenco.
(Music)

To touch the heart of the true tradition, Gypsies say, is to return to its birthplace, the family. The place where we sing in our mother's womb and the pride of her people.
(Music)

Away from the mere curious who do not share the same faith, jealous of a treasure that lies in the trove of their common memory, gypsies still want to live their flamenco, a flamenco that has not yet slipped through their fingers.
(Music)