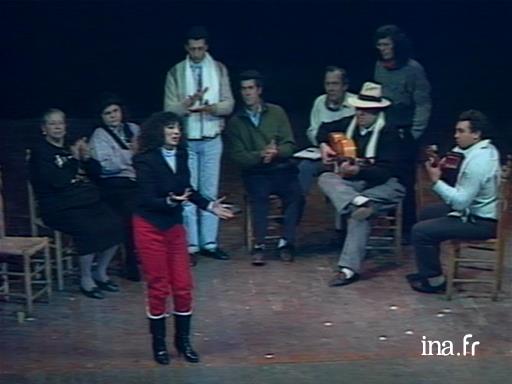 Franck Ténot presents us his favorite music: the gypsy group "Biniti» which in his opinion performs a show that is pure flamenco. Interview with Franck Ténot and extract from the show.

Pedro Bacán (1951-1997) was very quickly appreciated as an accompanying guitarist. But the flamenco of his family that originated from the lineage of the singer Pinini (XIXe-XXe) «was not particularly made for the stage. She therefore had to find something that already existed. So she didn't need to invent anything. The flamenco that was passed down to me, was not of interest to professionals because it was profoundly moral"[1]. According to painter-designer Miguel Alcala, the impresario José Renato called for it to reveal «values hidden in Gypsy clans"[2].

Through the French scene, Pedro Bacán could enjoy a new experience, he could bring his family's musical culture to the stage. By opening the doors of his family's flamenco to a wide audience, he incited a reflection on the meaning of the Flamenco performance. In early 1989, he put on a show called Le Clan des Pinini at the Théâtre Déjazet in Paris. His entourage included the singer and dancer Chacha Ines Peña, the singer Pepa de Benito, singer and dancer Miguel Funi, singer Diego el Cabrillero,Vicente Peñaon second guitar and his wife, who was also singer and dancer, and finally the palmeros - Flamenco percussionists, who were specialist in hitting their body, especially hand claps - Antonio Vargas and Miguel Alcala.

Follows a series of evolutionary shows "there were born out of my obsession - he mentions in one of his press releases - to represent the world I originated from, without betraying it, without allowing it to lose its soul. I primarily wanted to show a profoundly personified, humane form of music with all its fragility and all its strength. In my mind, I can see this great house full of music, dominated by the personality of my grandmother, where we could meet together at any time without needing any other reason than the need to be together and to sing. I also remember the ability we had to get together by the dozens, with my cousins and lots more people, and improvise celebrations that would sometimes last several days. There was always something intense that came out of it; they were moments of unlimited creativity. It is precisely this energy, this availability, and this musical quality that I wanted to reproduce on stage.» [3]

Pedro Bacán gives his definition of flamenco in an interview conducted by Daniel Caux in December 1996 and released on France Musique in February 1997.

"If I had to explain it, I'd say flamenco is a confession of human weakness or at least its fragility. And I do not think that it is the movement of one person, a fragile person,-you- towards the other person. It's you, tell yourself about your fragility and the other who is approaching you. It is not a movement from here to over there, but from over there to here. Flamenco makes no effort to be understood. It tells itself with its own words, and it is the other who approaches flamenco to listen to it and say to it: don't worry, you are fragile, but I too am fragile. We are all fragile.»

"You will see that it is the negation of the audience, the concept of the audience. '' So here is where all the confusion appears. By virtue of its nature, flamenco denies the audience. However, on the one side, the audience needs to understand, and on the other hand, the professional artist needs to be understood. So I do not want to get into the debate, but I do ask the question, I think that the distinctive nature of the flamenco world can be found there.»

Franck Ténot, what is your favorite music?

Well just recently, the gypsy troupe of the Piniti arrived in Paris, who put on a real show of pure flamenco, i.e., really what we see being performed in the villages.
(Music)

It is a poetic style of music in terms of lyrics, it is extremely rhythmic, very rich is terms of rhythm and moves. and it is all the more surprising when you know the artists, the singers, the dancers and guitarists who still practise this music in the villages today. they are naive people, I mean, I would like to say frustrated, but in the positive sense of the word.
(Music)

It is the song of a population who wanders a little, oppressed, and last of all, I am not saying that there is anti Gypsy racism but still, all the same! Then, when we see these uneducated people express themselves so beautifully, with their gestures and in their lyrics, the musical creations of the guitarists are extraordinary, and well, for me, it really is the greatest thing that you can see today, that and the blues.
(Music)