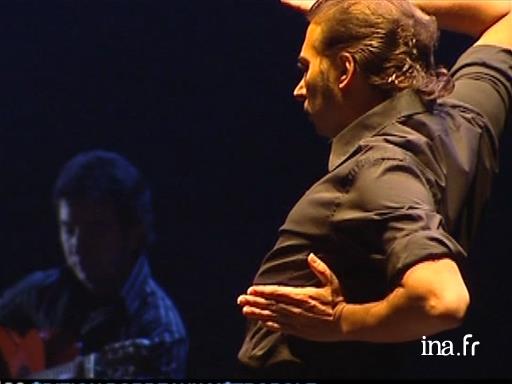 As part of the MIRA Festival: opening show "Arena": flamenco with the Andalusian Israel Galvan.

According to Paul Valéry, "the artist may be the virtuoso of this discipline of purity», «he who studies himself to play infallibly from the rarest of himself» [1].

The virtuoso lives his art as a challenge, His objective overcomes all the obstacles that he imposes on himself. Israel Galván was born a virtuoso of a dance that leads him to do away with the idea that appearance is the only thing that matters. This realization is the very argument behind ¡Mira! Los zapatos rojos (1998). This show paves the way for a manifesto for a new spirit of flamenco dance that was to be defined over the years. Each offering is to be a milestone in his pursuit of a dance that seeks to free itself from certain features inherited from the flamenco dance performed in cabarets. In these establishments, since the time of cafés cantantes, a kind of Parisian-style concert-cafés, up until the time of the tablaos, nightclubs offering a flamenco designed for tourists, the flamenco dance is subject to increased difficulty and severely put to the test by the competition. This virtuosity that is needed to survive becomes a stylistic virtuosity, when flamenco dance seeks to leave the cafés cantantes which had very much been in vogue since the mid-19th century, to take to the theatre stages from the 1910s onwards. The dance changes in terms of its status from one of simple curiosity, albeit sometimes exotic when it was exported abroad, to a form of artistic expression on par with the ballet or modern dance.

In light of its heritage, Israel Galván wants to refocus dance on the actual act of dancing. The gesture is not enough in itself, to be on par with the stylistic essence that is so dear to aficionados of flamenco. In Metamorfosis (2000), he raises up against the imitation of models, and in Arena (2004) against a certain expectation of the public. These small deaths to which the dancers submit themselves are part of the fascination of man with death. This double theme on the very meaning of dance and the finiteness of man projects Israel Galván into the historical and aesthetic context of contemporary dance. He is included among the greatest dancers of his time. Virtuoso certainly, within the meaning defined by Françoise Escal, because he is "the man of means", the man whose «work is the most followed and the most agile», but especially a man who knows how to be «hard for his genius», which ascetically speaking means knowing how to dominate and to go beyond a "native virtuosity.»

But in addition to that, he knew how to rise to the challenge of reshaping contemporary dance, while being confronted with a dance that even today is still termed as traditional. With each of his shows, he reinvents the dancing body. Fluidity replaces the hieratic bearing. It takes hold of an expressionless body region all the way up to the torso. The strength of this innovation is somewhat reminiscent of Merce Cunningham's. Gestural polyrhythms replace the dichotomous geography of gender: a female "dance that focuses on the upper-half" and a male «dance that focuses on the lower-half» These choreographic choices are fundamentally based on a coherent, even natural pursuit to harmonize percussion and body movement. Since 1998, Israel Galván has built up a gestural language that is his signature but which only scratches the surface of this revolution that he himself initiated. More radically, "dance is designed to find the «le centre vif», i.e. 'the dominant profile required by the structure necessary for musical expression» [2]. By placing the musical dimension at the heart of his revolution to change the flamenco dance, Israel Galvan only ceased to affirm that «the virtuoso shows man everything that a man can do'' [3]

And experience a new physical fight, the poetic and unusual dance of the bullfighter,
(Music)

This young Andalusian is seen as the reviver of flamenco. In Arena, opening show of the festival Mira, Israel Galván meets the choreographic tradition head-on.
(Music)

I set no limits. All the movements, the whole dance can go through a flamenco filter. I believe that by working on it, all movements, all rhythms can be flamenco.

Israel Galván will be performing on the stage of the TNBA tonight and tomorrow night at 8: 45 pm.
(Music)