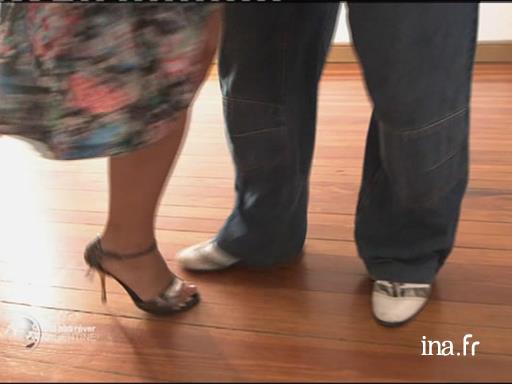 TV report. Buenos Aires, an encounter with young people who practise Tango. Portrait of Pablo Inza, a dancer who organizes many dance evenings and who teaches Tango. Every evening, the milongas open their doors to dancers. Interview with Christy, an American student who came to Argentina to be at the birthplace of this dance.

Commentary based on factual images interspersed with interviews with Pablo Inza and Mariana, dancers and teachers of tango.

In the 1970s, Argentine Tango went through a difficult time as a music form and especially dance: young people had become tired of this culture, preferring the vitality of Rock 'n' Roll or the solitary enjoyment of Disco. In short, Tango had become synonymous with mediocrity, even in Buenos Aires, where the few remaining dancers who were still striving to defend the nobility of this art, like Copes, Dinzel, Virulazzo or Arquimbau, only showed their heads on rare occasions.

Things then began to move in the 1980s with the emergence of a global craze initially triggered by the international tours of the show Tango Argentino. In the 1990s, an increasing number of aficionados began frequenting the milongas and dance courses worldwide, opening up an ever-larger market for Argentine professionals of this dance with its 2x4 rythym.

First of all - to simplify matters (greatly) let's say up until the end of the last century - Tango for the main part was taught by the older generation of milongueros who came from the ball-room dancing tradition, such as Cacho Dante, el Tigre, Pepito Avellaneda, and Tete (in addition to the dancers mentioned in the last paragraph). But, over time, these dancers gradually disappeared during the early 2000s.

The torch was fortunately passed on to a new generation of young Argentine dancers. A great many number of them, often with very intense training in classical or folk dance, were interested in the expressive possibilities of Tango. At the same time the high-level contributions these dancers made in terms of technique and choreographic inventiveness served to enhance the dance's traditional foundations. And it is they who are today working to ensure the proliferation of tango around the world.

The documentary Forever Tango introduces us to one of them, Pablo Aubia. By accompanying him during his classes and the milongas that he organizes, we follow the footsteps of the «tango Nuevo", full of youth and creativity, which once again prevails during the nights of Buenos Aires, in dance halls (here they are called "milongas) like Cochabamba 444 and the Viruta. Through the well-conducted interviews and the successful dance scenes, we gain insight into the driving forces behind this re-appropriation of Tango by the new generation, and especially the feeling of pleasure and euphoria that comes from the conexion with your dance partner.

Thanks to the profile of the young dancer American Christy, we also discover another phenomenon: one of «artistic tourism» which leads young and not so young aficionadaos, to come and live in Buenos Aires to learn the secrets and the codes of this 2 X 4 dance from the masters, e.g. Pablo

Eh Maohi, what are you doing?

Hi Pablo, are you keeping well?

What are you doing, are you just hanging around here?

Come on, come and drink a maté.

Tango is first of all a type of music that grabs hold of you and does not let go. One day, Pablo’s father took him to listen to Astor Piazzolla, and it changed his life.

This piece is just amazing. Is it really Porteño?.(from Buenos Aires)

I believe that tango music truly expresses everything what Buenos Aires is. When you immerse yourself in this environment, you realize very quickly that these pieces of music, our major classics have an abundance and an incomparable musical beauty. And I like that
(Music)

Pablo is 100% porteño, i.e. from Buenos Aires. He is the new rising star of the nights in the Argentine capital.
(Music)

A magician that looks a bit like a feline. Here, there is no one else like him who can make the girls swirl on the dark wooden floor of the milongas. Pablo is a pro of tango.
(Music)

With Mariana, they have known each other for years. But they only just decided to become partners... and only partners.
(Noise)
(Music)

Christy is American. At 23, this student has chosen to treat herself to a sabbatical in Argentina, to improve her Spanish and discover tango.
(Music)

At night, Buenos Aires dances a lot and sleeps very little. It is 6 a.m., Pablo’s evening has come to an end.

It’s finished? No, but I wanted to dance one last tango.
(Music)

Milongas are burgeoning all over Buenos Aires. And now the first hours of morning belong to the tangueros.
(Music)

Pablo, he always goes to bed at dawn. For 20 years, he has been flirting with the night. And then one day, without even noticing, he woke up and he was a professional dancer.
(Music)

I don't really have the impression that I’m working. I don’t have to clock in at the factory, I have no fixed schedule and no obligations in terms of my appointments. What I do, I do it first and foremost with passion, and I take it very seriously, but it’s not like a job. From this point of view, I believe that I am rather spoilt by life.

It is true that there are worse jobs. It is 4 p.m., Pablo is starting his day. He is giving a private lesson to Paula, one of his Tuesday pupils.

By controlling your breathing better when you transfer your weight onto your leg, relax your shoulders, relax and pretend you are going up a level.
(Music)

The techniques and methods are adapted to the other person’s body. That is what tango is also about. It is about discovering how to release the body and exploit your potential.

And the body to which you are referring, what does it need?

It needs for me to clasp it, to hold it.
(Music)

The woman is half of the tango dance, and we are the other half. Well, I like to think that I am dancing in the body of the woman and if she likes it, all the better.
(Music)

It is a dance where we walk together, entwined. We move and we try to find a form of communion, it resembles almost a rite at this point.
(Music)

It's better than last time.

oh really, so is it working?

Yes, like the other day at the Milonga. When I talk with my girlfriends, I always tell them that Pablo is one of the strangest dancers, as he says himself, he enters your body. It's a very subtle thing, I like it.

There is something a little sexual in what you are saying, isn’t there?

Yes, in the way you talk about it,

OK, from a certain point of view, yes, it's a little bit like that, it is about surrendering yourself. But for me, it's more sensual than sexual, it’s more implicit than explicit.
(Music)

Dancing with an Argentinian, well that’s different. I believe that every place has its own way of dancing tango. And when you dance with an Argentinian, he holds you closer. I don’t know if this attitude is more macho, but I'd say that the way they hold you in their arms is more, more passionate.
(Music)

After Seville, where she discovered tango, Christy, the American student decided to go to Buenos Aires for a reason that was both simple and complicated, she wanted to touch the soul of Argentina. The shortest way to achieve her goal was to spend time in the milongas.
(Music)

It is 1 o'clock in the morning, Cochabamba is barely starting to come alive. This milonga is very popular at night in Buenos Aires. Christy comes here t least once a week, by herself and without any taboos. Come here to dance, you just need to know how the codes work.
(Music)

If I look at you with insistence, as I am doing now, it means that I want to dance with you. If I don’t look at you and I avoid eye contact, then that means I don’t want you to be my partner.

The language is a subtle one. When two people’s eyes meet, it is discreet acquiescence, the temporary couple will then have to follow the rule of the tanda. The tanda is a series of four consecutive dances, hence the importance of carefully choosing one’s partner. Tonight, the first person Christy said yes to comes from Sardinia.
(Music)

Do people dance tango in Sardinia?

And there are many people living in Sardinia?

I have come from Seville, I love it, I loved the south.
(Music)

Even if you are not a beginner, here, if you want to perfect your tango, there is only one thing to do: accept all the invitations, without exception.
(Music)

Some mornings, Buenos Aires wakes up with a hangover, it’s a little as if we had all followed the most famous dandy of French song during one of his nocturnal pub crawls.
(Music)

At the moment, I listen to Serge Gainsbourg, I just love his music. He could have been a tanguero. If he had been born here, that's for sure, he would have lived a story involving tango.
(Music)

He was a true Bohemian for me. I don’t know much about his life, but he gives me the impression that he lived on the edge, and passionately.
(Music)

Becoming a tanguero is often the result of having led a non-conventional life. A distant memory: Pablo’s family had to flee the country during the worst hours of the dictatorship.
(Music)

Tango taught me a lot about myself. I had a somewhat wandering childhood, I moved a lot with my family, in Argentina, and also abroad. And the day I discovered tango was very beneficial for me. Tango gave me an identity, and I suddenly felt Argentinian.

Tonight, the place to be is the Maleva. There will be Argentinians, of course, and many foreigners too. Because today, tango helps bring a lot of currency into the country.
(Music)

Mariana, Pablo’s partner understands this too well. Her school is raking it in, it attracts students from around the world for 6 months of the year.
(Music)

We will start in a little while. Normally, there will be three instructors tonight, this is the last class of the season, afterwards, I'll be going on tour. Then tonight, we will have a small party.

Christy didn’t want to miss the event. She learned that Pablo Inza was likely to make an appearance that evening. In the meantime, she is making a good impression.
(Music)
(Noise)
(Music)

Here, the students only dream of one thing: to reach a certain level that will allow them to feel one of the essential parts of tango, what’s known as the "conexion".

When you dance with someone with whom you're really connected, it can look like a kind of meditation or trance. It transports you into another world. It can be as strong as fireworks exploding.
(Music)

3 o'clock in the morning, time for the real tangueros. When Pablo arrives on the floor, the temperature rises a few extra degrees, Gods knows why.
(Music)

Clearly the look of Christy was explicit enough tonight. The American who wanted to discover the Argentine soul is really on the right track.
(Music)

As for Pablo and Mariana, they are already somewhere else.
(Music)

Tomorrow, the most glamorous partners of Buenos Aires will be flying to Europe to promote genuine Argentinean tango.
(Music)

In Argentina, digitizing archives to save tango

In Argentina, digitizing archives to save tango