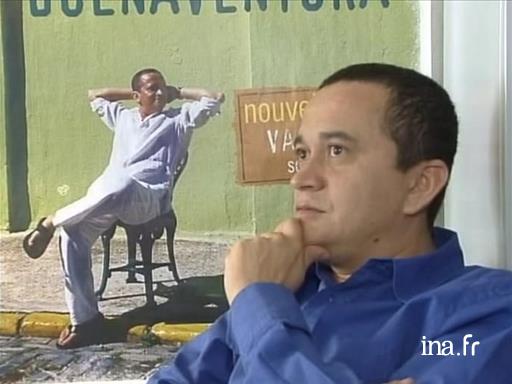 The Colombian singer Yuri Buenaventura talks about the African roots of tango. It also includes comments by musician Juan Carlos Caceres. Extract from a concert and interviews.

In our collective minds, Tango, despite being referred to as "Latin", does not fall under the category of "tropical" music. Although it expresses a great sensuality, not unlike the Caribbean dances, it also seems to possess something more subdued, more stilted, and more tragic, even more so than Salsa, which is usually considered cheerful, upbeat, and exuberant. In its relatively simple rhythms, in its instrumentation where the string instruments and the piano play an important role, in its lyricism-tinted melodies, there is also something much closer to European aesthetic than we find in typical Caribbean music which is punctuated by percussion instruments and African choirs.

So there you have it: the major difference between Tango and Salsa is that in latter there are, a least on the surface, hardly any traces of African influence, with its percussive poly-rhythms, its vocal and instrumental improvisation, and, of course, its provocative swaying of the hips. This is light years away from the upright chests, the concentrated expression and ornate elegance of the tangueros.

And if we can go one step further: it was largely in reaction to the ethnically and socially despicable nature of its origins - after all, Tango was a dance of the poor, mulattos and reprobates, practised in brothels and cafés of ill repute, in sordid districts of Buenos Aires. The history of Tango was reconstructed at the beginning of the 20th century as an elegant form of dance and music with clearly visible European filiations, with a repertoire of sad and nostalgic songs that were miles away from the small obscene choruses and picaresque allusions of its beginnings. It was partly to shake off the memory of its vulgar and multi-racial origins that Tango was whitewashed (if not whitened) and elevated to comply with codes of European culture - a model adopted by Argentine society at the beginning of the 20th century.

The very old black roots of tango were virtually concealed throughout the 20th century, with however one important exception: the revival movement of the musical style called "milonga" (actually a binary rhythm in 2/4 time close to habanera) initiated in the 1930s by authors and composers who were also close to progressive political movements of the time such as Homero Manzi and Sebastián Piana [1].

Is was only at the turn of the 21st century that this distant African influence was to be rediscovered by musicians and musicologists. The story "The black roots of the tango" takes us on a discovery of two of the most prominent of them, who actually come from two very different cultural backgrounds.

The first is the Colombian salsero Yuri Buenaventura, great performer of Caribbean music today, and who, in themes such as Afrotango, highlights the affinities of Caribbean music with the Tango. "Tangó», is a term that comes from the Congo, which means a meeting place to practice dance», he says. The Argentines then moved the tonic accent to europeanize it and to create a more Spanish or Italian-sounding term. But initially, it's an «African Word.»

The second is the late Juan Carlos Caceres, an Argentine musician who used to play Jazz and whose research and creative efforts were largely devoted to the uncovering of the black roots of Tango. In his opinion, there are particularly noticeable origins in the rhythm, since the famous "clave", the rhythmic formula that is so characteristic of Cuban music can also be found in Tango. Further proof: it is quite possible to dance a Salsa to a "Caribbean" milonga composed by Cáceres, such as Tango Negro or Toca Tango.

According to Cáceres' theory, the ethnic population of Buenos Aires at the end of the 18th century was very much like that of Havana's today, with a strong black and mixed-race population stemming from the slave trade and largely made up of domestic employees. As in Havana, these blacks practiced their religious or secular African holidays (people came together to perform the candomblé and Tango Congo, or carnival celebrations) in their districts, like the suburb of Montserrat.

But while this «coloured» population is still strong in the Caribbean, the same cannot be said for Argentina. The authorities of this country, notably under the Presidency of Julio Rocca in the 1880s, implemented a plan to «europeanise» the Argentine population. The plan was made up of two complementary phases.

The first phase involved what we would today call a policy of ethnic cleansing, i.e the pushing back or extermination of the Mapuche Indians from the pampas (sadly known as the famous «conquest of the desert"); it included efforts to reduce the black population (they were drafted as soldiers to be used as "cannon fodder", and it encouraged migration to Brazil, to which can be added the consequences of terrible epidemics of yellow fever that ravaged the poorer neighbourhoods of Buenos Aires at the time).

The second phase involved opening up the country to massive immigration from Europe(mainly from Italy and Spain, but also central Europe) that went on to completely overwhelm the non-European populations already living in Argentina at the turn of the 20th century.

One cultural consequence of this European tropism: at the beginning of the 20th century, the Argentine ruling class profoundly despised tango, regarding it as a «reptile of brothel" born in the city's shady suburbs, which were filled to the brim with a population of poor people and dropouts.

But an incredible event was to completely change the situation: the same tango, which they despised and mildly feared, was adopted by the Parisian bourgeoisie, epitome of impeccable good taste in the eyes of the well-to-do inhabitants of Buenos Aires. OK to the Tango, said the good Argentine society, but on one condition: that it is stripped once and for all of its shady rags and its lingering odour of mixed-race origins to become an honourable form of music and dance that can be practiced in the best dance halls; and in particular, that is removes everything with even a whiff of distant African origins: suggestive moves, improvised lyrics and the associated rabble.

This report, which is unfortunately too short, only allows Caceres to give the briefest outline of this thesis. A thesis that is also contested by those, who without denying the very distant affinities with Caribbean music, particularly noticeable in Milonga, still insist on the fact that Tango, which appeared at a time when the populations of African descendants had all but disappeared from Argentina, was actually only composed, performed and danced in the country by a white population of European origin. The debate, therefore, remains open...

But is that not precisely one of the merits of Tango, this dance of mixed origin par excellence, to be able to so easily mix together aspects of the raucous bandoneon of German origin, the romantic operetta of the Spanish, the Italian sense of melody, the nostalgic Jewish violins of Central Europe, and even the elegant violins of French music from the beginning of the 20th century with the distant echoes of black drums? If so many cultures claim to have had an influence on Tango, is it not, quite simply, because this music has been able to express something universally human by combining all this influences.

The Colombian, Yuri Buenaventura is not content with just singing and dancing whenever he can, he also tries to raise awareness among the public. The latest message from a man who does not forget to emphasize the africanicity, the African origins of the tango.
(Music)

Already, the term tango, it’s not tango but tango. People say tango, but it is tango. And tango is a Congolese term, which means meeting place. A tango was a place where men of African origin would play rhythms, and it was a form of entertainment, a parallel celebration in a society that excluded Blacks.
(Music)

The tango has African origins- the claim is so astonishing, even audacious that we have decided to get the advice of an Argentinian specialist,Juan Carlos Cáceres, author of several CDs and various publications on the subject.

One of the meanings of the word tango is the word tamburo or drum, And another thing, tamburo is a meeting place for Africans, very well. The tunes that they listened to at the time were El Candombe, and it was that ...
(Music)

There are other versions that were much more staccato
(Music)

And even though the piano and bandoneon have gradually replaced the drum, the beat has remained the same, a binary beat.

So, all these beats come from somewhere, come from drums.
(Music)

The whole African part of the tango was erased from Argentina’s collective unconscious; the country wanted to resemble Europe, which meant being white.

And the Argentine society of the time did not want to be black or Indian or Latin American. The society wanted to be European in its approach, in its design, in its dealings with Europe.

It is already a new phenomenon, even to be able to admit the negritude, the black origins of the tango, to acknowledge history and the past, and to call into question the 19th century. And nobody, today, is ready yet to review our history in an objective manner.
(Music)