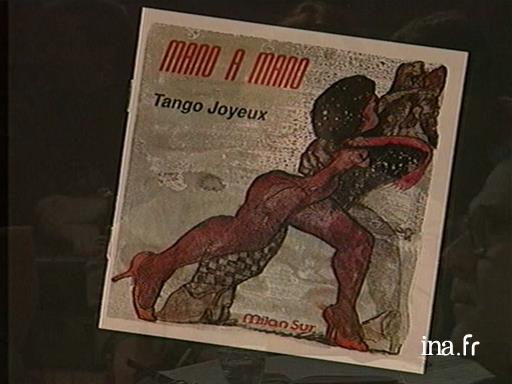 MANO A MANO gives a live rendition of "Milonga from Puerto Rico". They are joined by two dancers.

It was Camille de Rhynal, who in 1906, as a bet with a friend, got Enrique Saborido to come from Buenos Aires, who would go on to enthrall all of Paris with his tango (then tango-milonga and tango-habanera, see above). But like rock, tango has a very long history, its very own culture.

Let's not forget that the rhythms of milonga and payadores (Argentine troubadours from the argentine countryside who went to the city, who would, for a few pennies, improvise on any theme) came into contact with the habanera rhythm created by Caribbean sailors in Buenos Aires at the end of the 19th Century. These milonguera roots gave tango its sense of improvisation; while its havanese roots enriched it with contratempos (offbeats) and syncopations. The two rhythms are almost identical and can be mixed easily. To this can be added the Italian canzonetta, which mellowed the melodies. The Spanish tanguillo brought with it the innate sense of this country for choreography. The rhythms of African candombé (not to be confused with Brazilian candomblé) added a certain spirit of trance which was to become an integral part of tango and its music. Then the German bandoneon, often in a minor mode, completes the range needed to express the nostalgia of the emigrants who were far from their wives, and their sorrow for their lost country. Finally, tango, after Enrique Santos Discépolo, saw Carlos Gardel (1890-1935, born in Toulouse), who made "tango move up from the feet to the lips».

At that time, the rhythm of milonga was also known by gauchos and payadores, this milonga came into contact with the rhythm of the habanera. Argentine milonga and habanera were absorbed into tango. And they particularly inspired musicians.

This rhythm of milonga-habanera continued to evolve, for example thanks to the great bandoneon player Piazzolla, whose favourite rhythm is still an offshoot of ancestral rhythms:

As Tango is addressed elsewhere in this study, here is only a short video that shows- we hope sufficiently clearly- the difficult challenge that we have set ourselves to speak about dance and musical rhythm using the written word. Please listen carefully and spend a moment watching this extract. It is only an example of a milonga danced by Coco Diaz and his wife in Paris in 1992: Mano a mano. Pay particular attention to the repetitive rhythm; which here is as fast as samba but orchestrated differently, and syncopated, strictly identical to the milonga-habanera, but with a gaiety that the latter lacks. It is also possible to see that the basic form of milonga -as is also the case with so-called «Argentine" Tango is a square step, often finished off with an Argentine chassé step», which has been famous for more than a century. The man regularly does an assemblé to the right followed by a step back... This is so characteristic of this form of tango.

Unlike all the other forms of dances that we were able to see from the Caribbean, and which have a direct link with our polka, as we have tried to demonstrate, there is one specific characteristic of tango: it is a totally improvised dance. From one step to the next, in principle! Rodolfo Dinzel, a very famous dancer and tango theorist from Buenos Aires said in 1991: "when I dance a step in tango, my partner doesn't know what the next one will be...." And me neither! ». This is clearly "Something very sophisticated".

It is probably in this form that tango arrived in France, and the first person to demonstrate it, Enrique Saborido, who was also asked to teach it, probably had to adapt to the French and European mentality of the time, which was to write down its "figures and steps". He was probably the first to water down the original tango, in an attempt to synthesize it, to extract constants from it. When tango started to be performed in competitions, after his arrival, it proved to be rather detrimental to the integrity of the dance: it was carved up into figures and steps, which were classified, written down and listed in the dance manuals of the time. It was therefore standardized, and lost its essence.

However, it saw a revival in 1989, after the performing of the show Tango Argentino, with the success of what had then come to be called "tango argentin" (as if it were not inherently Argentinian anyway), to clearly differentiate it from the old style of tango of the French dance halls where many people would only make the same step repeatedly for any occasion.

We must not forget with respect to tango: the world of tango is composed of many tango dances, including many different styles; but also the dance called milonga, which can be seen in the extract, and the Argentine Waltz, which isn't really a waltz! This waltz with its Argentine «dressing» or «sauce» is really a walked version of the tango. And why not? It is the richness that comes from the mix. Once again a kind of "salsa"!

Mano A Mano, , we are even! Uh, Well, it’s not the scheduled time, but Aline Pailler is seething with anger, literally. She is boiling in her seat, she is angry, despite his charming smile,

History of the bals musette (dances with accordion music)