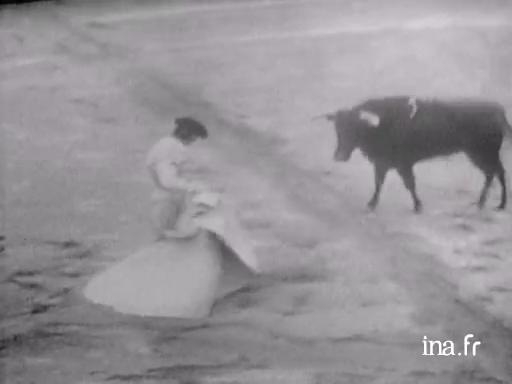 Images and commentary on a bullfight given by Manuel Benitez El Cordobes in a Toulouse arena, followed by a short interview on the evolution of his style, a recent altercation with matador Paco Camino in Aranjuez and on what scares him.

A popular bullfighting figure in the 1960s, Manuel Benítez Pérez, known as "El Cordobés", was born in 1936 to a republican blue-collar family in Spain's Córdoba province.

Discovered as early as his first combats in 1959, Benítez quickly climbs the steps of a bullfighter's career, up to the "alternative" ceremony, which elevates him from the rank of "novice" to that of "bullfighter". His style, which is more visual than technical, helps him conquer a sizeable audience, including bullfighting and magazine enthusiasts. Despite his "fear of the microphone", El Cordobés is a bullfighter who receives lots of media coverage. When faced with bulls, he impresses audiences with his audacity and the sometimes life-threatening risks he takes, like on 20 May 1964, when the powerful charge of Impulsivo, the bull, almost cost him his life. However, he reappeared one year later in front of an audience at the Toulouse arena, at the height of his fame and true to his fiery reputation.

During the following decade, Manuel Benítez progressively distanced himself from the arenas, delivering his final combat in 1981. In 2002, his native region, which inspired his stage name, proclaims him the "Fifth Calife of Córdoba".

Here in Toulouse where, yesterday afternoon, in the Soleil d'or arena - which earned its name because the sky was then clear and sunny - El Cordobes, the most famous and otherwise best bullfighter of the moment made his French comeback in a yellow straw outfit, applauded by the almost-full arena. El Cordobes arrived from Aranjuez, a Spanish plaza where he caused a scandal Saturday afternoon transforming the arena into a boxing ring by choosing to not fight with the beast but rather with Paco Camino, another famous bullfighter. The maestro quickly got rid of his first bull, despite its warm reception when faced with the cape.
(Music)

At that time, a thunder storm came, pouring rain down onto the arena. The event was suspended but resumed at the request of El Cordobes, an act which is not without value for those who remember that in Madrid, last year, the day of his alternative, a slip on much drier grounds resulted in a very severe injury. Thereby reconciling himself with what was left of the crowd, El Cordobes wanted to avenge himself, and under unleashed elements, he delivered a festival where he appeared supreme and glorious. Veronicas and Chicuelinas with the cape, followed by a large series of Naturals and Derechazos which triggered the cheering of the crowd.
(Music)

A huge circular cape pass - he was able to make the bull spin around six times - automatically triggered the crowd's enthusiasm, giving way to utter madness when a large death-blow to the hilt led him to be rewarded with the two ears of the beast. Before his immediate departure for Madrid, El Cordobes briefly gave us, in an insane hustle between hysterical people, the only interview he would give that day. El Cordobes protested when we asked him why he seemed to be getting tamer, his style seemingly more traditional. Answer: No, I'm always as crazy in real life as I am in the arena. I've been this crazy since I was born.

Also, what happened with Paco Camino on Saturday? Answer: Nothing, nothing at all. A simple argument Besides, we embraced each other at the end, like old friends.

Why squabble with each other in day costumes? Answer: Well, speaking a bit loudly, we started to argue and we went as far as using our fists.

How did this happen? Answer: It wasn't a serious clash. It's not important.

Is it fear that makes you nervous, now, in the arena? No, the only animal that I'm really afraid of is the microphone!