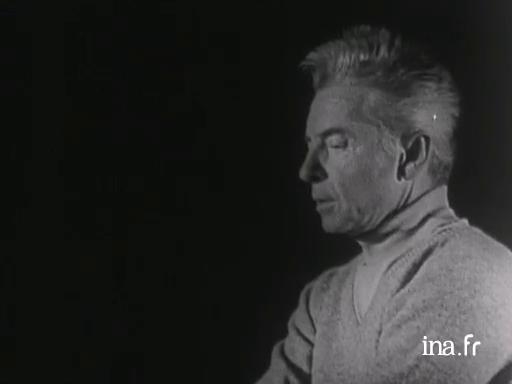 No other conductor of the 20th century reached the level of international renown. Born in Salzburg in 1908, he studied piano in his birth town and then in Vienna. In 1929 he led his first concert and his career began very quickly: general director of music in Aix-la-Chapelle, he gave concerts in Vienna, the first head of the Berlin Opera until 1945. After the war, banned from conducting for a while due to his membership of the Nazi party, he worked again at the Salzburg Festival, then he appeared at the Scala in Milan and directed the Lucerne Festival. In 1951, he participated in the reopening of the Bayreuth Festival and in 1955 he was elected as musical director for life of the Philharmonic Orchestra in Berlin, which he didn't leave until 1989 shortly before his death. At the same time, he directed the Salzburg Festival, created the Herbert Von Karajan Foundation which organises international competitions and for a while had the role of musical advisor for the Paris Orchestra. Passionate about music reproduction techniques, he left a considerable discography that is regularly republished.

His perfect knowledge of orchestra, his demands - which caused several splits - his sense of theatre, his search for auditory beauty through the luxurious fondue of musical equipment, his attention given to the tempo and intentions of the composer all made him one of the very greatest conductors of the 20th century.

An equally impressive figure whether in life or in front of an orchestra. For the first time, he shares a few of his secrets. How did you become a conductor?

It was my last piano teacher that suggested it to me... You know, I studied here and then I went to Vienna, and at that time, I already played the grand repertoire, concertos and all that. After a year, a professor in Vienna told me: "Listen, you'll never have the satisfaction of your profession because you think... to translate what you think, you listen, you need 10 hands, and you only have 2. I suggest that you become a conductor if you can", and it was, I think, a very good suggestion. [German]
(Music)

His French wife, Eliette, and his daughters Arabella and Isabel also live in Mozart's universe.
(Music)

In the afternoon, before the performance of Carmen, Von Karajan directs Boris Godounov's rehearsal for which he's the director, the set designer and the conductor at the same time.
(Music)