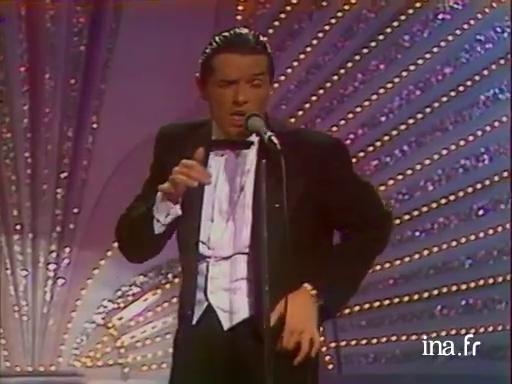 Dressed in a tuxedo, the Austrian singer Falco performs what is considered one of the first songs of German rap, and one of his greatest successes: Der Kommissar.

Born on 19 February 1957 in Vienna in Austria, Johan "Hans" Hölzell, known as Falco, started his musical career in the middle of the punk movement in various Austrian outfits (Drahdiwaberl from 1978 to 1983) before recording his first solo album in 1982, Einzelhalft, which gave him his first big hit with the song Der Kommissar, a song with an innovative hybrid style combining hip hop, sung parts and rap sequences.

After a second album, Junge Roemer, which was once again successful with German and Austrian audiences, Falco decided to target international audiences by writing songs in English, resulting in 1986's Rock me Amadeus which was his biggest hit until now. The eponymous single reached the tops of American and British charts, and for the first time ever, a white, European singer was reached number 6 in Billboard's Top R&B Singles Chart, which was reserved for black music.

Nicknamed "the first white rapper", Falco quickly released three new albums, Emotional (1986), Wiener Blut (1988) and Data de Groove, which, despite their qualities, had a hard time convincing listeners. Falco plunged into a depression, drank, and in 1992, he reappeared with the Nachtflug album which was number 1 in Austria but wasn't able to achieve the same international success. He died tragically in the Dominican Republic on 6 February 1998, at the young age of 40.