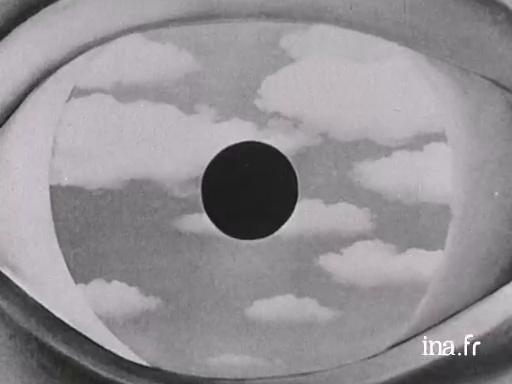 Portrait and interview of René Magritte on the surrealist movement, his artistic approach, and his own trajectory which the journalist compares to that of poets. Images of numerous works by the artist.

Populated by models and men in bowler hats, the work of Rene Magritte (Lessines, 1898 - Brussels, 1967), is a mistaken realism playing on representation, manipulating mystery, poetry and the absurd. Son of a modest tailor couple, his mother committed suicide when he was 13 years old. He painted his first canvas three years later before taking lessons at the fine arts in Brussels.

First influenced by Cubism and futurism, he was soon attracted by the collages of Marx Ernst and had a revelation withThe Love Song by De Chirico. An advertising illustrator through necessity, Magritte participated in the Dadaist reviews to impose himself in 1926 as the leader of Belgian surrealists. With his wife Georgette Berger, childhood sweetheart and companion for life, he went to Paris where he lived for three years, joining the Breton group, meeting Dali, Paul and Gala Eluard. But his relations with the French surrealists, as with the communist party would prove to be chaotic.

The split was consummated at the end of the war, Breton resenting his incursion into neo-impressionism, his "Renoir period" as he mockingly called it. Perhaps as a response, Magritte parodied fauvist paintings in 1948, his "cow period", as he named it. This didn't harm his success, his works with often jarring humour were exposed in Brussels and New York where they had a certain influence on Pop Art.

These inverted mermaids, who still don't look like anything recorded in poetic mythology, were created by René Magritte, René Magritte the surrealist painter. René Magritte was born in Lessines, in Belgium, in 1896. He was a student at the Brussels Beaux-Arts school. He moved to Paris in 1927, and became friends with poet Paul Eluard, was ranked the leader of the Belgian surrealist movement, and various consequences led to him being considered an artist of revolutionary conception.
(Silence)

A revolutionary artist who became a classic surrealist.
(Silence)

How exactly does something revolutionary become classic, and, more importantly, what does it express? Do you have any regrets regarding this?
(Silence)

Oh no, because what is discovered always... (and who was unknown since he was discovered) always becomes a scandal, not just to be scandalous, but in fact, to break away from habitual thoughts, it's scandalous.

Since you broke away from traditional ways of thinking almost half a century ago, you've more or less led all of us, you and the others of your generation, to think in a certain way.

Yes. For me it's all about providing something to think about, maybe in a certain way as well. But what my paintings give to think about cannot be conveyed with words. I'd have to remain silent in order to be genuinely sincere. Not sincere, but... So that I don't talk just to say nothing.

Yes, but poets use language and language can, belongs to the invisible, to that which cannot be seen. As for me, a painter, I think that I can only show people the appearance of things, that which is visible. But, these visible things cannot exist without mystery. For me it's also about realism, in the sense that the most important thing for me is what is real. Reality, real things. But real things are not the vulgar and easy things of our immediate surroundings. What's genuinely real, there's only a certain time when we get that feeling. And that's what I try to express with my paintings.
(Silence)

A René Magritte exhibit is currently open in Paris, at the Alexandre Iolas gallery.
(Silence)