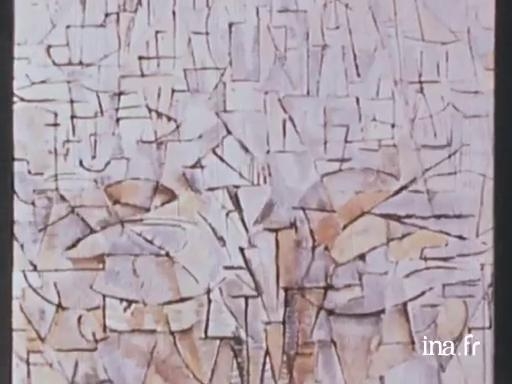 A short portrait of Piet Mondrian and an interview with Michel Seuphor, abstract art critic, who tells of the painters course: his attraction to Cubism on his arrival in Paris and his evolution towards abstraction.

Emblematic painter of modernity and abstraction between the two wars, Piet Mondrian (1872, Amersfoort - 1944, New York) embraced several movements before founding his own. To the Academy of fine arts in Amsterdam, where he studied from 1892 to 1985, he owes the classic aesthetics of his first paintings, dark naturalistic landscapes. At the start of the century he evolved towards fauvism and neo-Impressionism by discovering Munch, Seurat and Van Gogh. It was in Paris that he specified his orientation towards the abstract by first familiarising himself with Cubism. Progressively, trees and seas were stylised on his paintings to become the interlaced black lines that characterised his work.

The First World War brought him to Holland where he created De Stijl (The Style) in 1917 with Theo Van Doesburg. This group of painters developed Neoclassicism, the utopian art, from an unstable and insecure European environment. Mondrian's works would also develop around harmony, unity and abstraction of rectangles with bright primary colours on a white background. In 1938, feeling the eminence of war, the painter left for London and in the end fled the bombing by going to New York. Mondrian would perhaps find the ideal environment for his canvases in this vertical and rhythmic town.

Piet Mondrian was born in 1872, in Holland. He started by painting landscapes, portraits or other still lifes of a very classical nature. In 1911, between Christmas and New Year, he came to Paris in the footsteps of Van Dongen, who Michel Seuphor reminds us of...

Van Dongen was the Dutchman who was, at that time, speaking about him a lot, in Paris and who he admired.
(Silence)

But to him Alain had been very sensitive to Cubism, to the Cubist discipline, and he was fully engaged in it when he came to Paris. For a year he painted Cubist paintings, even of the subjects that he brought with him from Holland, which he reworked in the Cubist style, which were transformed little by little. So, there was this extremely interesting development, which is one of the most moving cases of painting this century, one of the serious consequences, is that Mondrian had already evolved beyond Cubism before 1914.
(Silence)

Yes So it would be necessary to go back a bit with a word on...

You could define a Cubist painting as a sort of symphony of straight lines, an infinite variation of little straight lines. With some curves to liven them up. And all grey.
(Silence)

This infinite variation of straight lines was developed gradually, during the evolution, during one year, the year and a half when Mondrian reduced himself to vertical and horizontal lines, to the exclusion of everything else.
(Silence)

At the same time Mondrian abandoned the representation of objects, and slipped progressively, between 1910 and 1912, towards abstract style. He slipped from figuration to abstract, at first by thought.
(Silence)

The idea of order, of the horizontal and vertical discipline, that he found in nature, in everything.
(Silence)

These diaries from 1900, which I might add are difficult to date, but I think that you can say they are from 1912 to 1914, contain thoughts which strongly indicate this sense and which come up several times. He looks everywhere in nature, because he loves nature, he's a painter and he paints it so much; little by little, he starts to see the horizontal and the vertical in nature. The sea is horizontal, the trees which descend into the sea are vertical. So the horizontal and the vertical meet and that becomes the masculine and feminine; a fundamental dualism on which he will base and found everything.
Music

And finally, towards 1914, all the paintings look the same, horizontals and verticals intersect and intersect again to make up the fabric and a universe which will from then on be Mondrian's, throughout his work. We are in 1919, Mondrian, after a brief stay in Holland, returns to Paris, rue de Coulmiers at first, then rue du Depart, where he will live for nearly 20 years and will carry out his main body of work, poor and nearly always alone.
Music