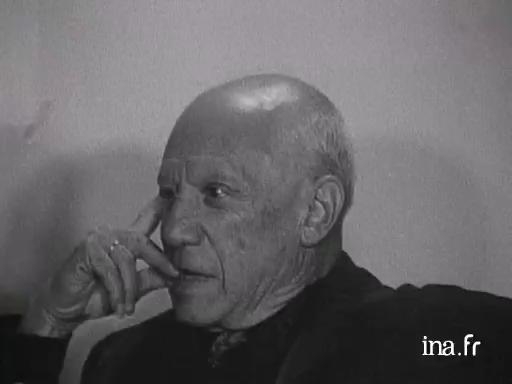 Informal conversation with Pablo Picasso, living on the French Riviera at Mougins, regarding his public appearances, television and his paintings.

A major artist of the 20th century, Pablo Ruiz Picasso (1881, Malaga - 1973, Mougins) was initiated into painting very early in his life. His father was a professor at the School of Fine Art in Barcelona, to which he was admitted at fourteen years old, before joining the Royal Academy in Madrid. This classic training did not stop him from frequenting cafes and houses of ill-repute, where he found the theme for theDemoiselles d'Avignon, his first foray into cubism. Before the war, he founded the movement to revolutionise figuration with Braque, through inspiration from Cézanne and primitive art.

Picasso still tried out other styles, from melancholic expressionism in the Bleue et Rose periods (1901-1907) to surrealism (1925-1936), passing by neo-classicism (1916-1924) and on to other disciplines such as sculpture, engravings, ceramics. His work would never evolve towards complete abstraction and recurrent characters reappeared: harlequins, minotaur, horses, African masks and the feminine figures of his multiple conquests.

An engaged artist without going directly into combat, Picasso spent the two wars in Paris, denounced Francoism through paintings and joined the communist party in 1944, without giving up his hedonistic way of life. He refused to return to a Francoist Spain until his death.

Once when I was in Nice, I was given a little piece of paper to read, when we received, I don't know how many thousands and thousands of youths from the world. I don't know if you remember, this happened many years ago. So there I was, on the monument of the Dead, you know, huge, with a crowd that came from La Bocca, just like that, down to Nice, you know, by road, and so then, I read... I don't know what because it was very short and it wasn't me that wrote it, still, but finally, I spoke a few words. I was a big success, apparently. I don't know what they heard because, myself, I'm not used to speaking in front of a microphone.

In any case, I was impressed, very touched by this type of sympathy, love or whatever, or friendship that so many people showed me.

Exactly, you like the word "love" very much, Pablo Picasso.

Yes. Even, one day, a young girl who interviewed me for I don't know what newspaper, I told her this: "You know, for me, there is only love", right?

I love people very much.

If there weren't people, I think I would even love a doorknob, you know, a chamberpot, anything.

Do you love television as well? Not really.

You know what would be fantastic, when we have you in front of television cameras? It would be to leave you all alone, free and you would be very capable of doing fabulous things for the viewers, you would invent things for them.

Probably. Sometimes, I find magnificent things on television, very pretty things, that I like, that interest me. But sometimes, it's sometimes horrible. I say this because we're here, both of us all alone. No, it's not true: everybody's listening.

If you had to choose, by yourself, the era, the painting, the canvas that had to survive you, what painting would it be? What period would it be from?

I don't know. That's hard. I did them with intentions that were so attached to the moment, to the era and state in which everyone and myself were that it's very difficult. During the time of Guernica, I did Guernica, you know. It was a big catastrophe, the same beginning as many others that we've covered, you know? But anyways, that's the way it goes. It's personal, isn't it? Basically, they're memories that we write by ourselves, a diary...

You are extremely young, Pablo Picasso.

You know my age. It might be a young age.
(Music)

Picasso and his wife Jacqueline.
(Music)

A report that's never been seen before. Picasso in one of his Mougins studios.
(Music)

And Jacques Prévert has written a poem that Yves Montand will recite to us...