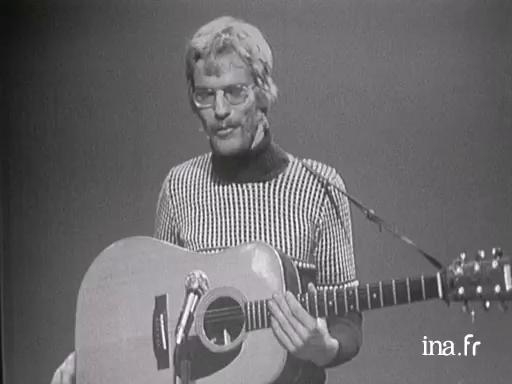 Mireille welcomes Dick Annegarn to her show in his early days. After a short interview, Dick Annegarn performs extracts from several songs in English and in Dutch and finishes by a chorus from Bonbons by Jacques Brel.

Dick Annegarn, a Dutch author-composer-interpreter (he was born in La Haye on 9 May 1952), is definitely one of the most atypical and talented celebrities to appear in the last thirty years in the French musical landscape. Equally influenced by both Jacques Brel and Georges Brassens as well as American folk and blues music (Woody Guthrie, Pete Seger, Big Bill Broonzy), Annegarn decided to give it a shot in Paris when he was 20 years old. He was a success early on, with the release of his first record by Polydor in 1973. Songs such asUbu, Sacré Géranium and especially Bruxelles immediately imposed his singular, falsely naive, abrupt and sophisticated style, which had a great poetic force. Three other albums followed between 1975 and 1976 (including another great success, Mireille) before the singer decided to head for a more underground direction. He settled in the Parisian suburbs, became very active in community organisations and continued to record albums influenced by jazz and improvisation (Ferraillages, Frères ).

But it wasn't until the middle of the 1990s that he made a lasting comeback at the foreground of the scene, with his signature to the Tôt ou Tard independent label and a few exemplary albums (Approche Toi in 1997, Plouc in 2006). Today, he's considered to be one of the greatest references in the young French alternative scene (Matthieu Boogaerts and Thomas Fersen).

Good, there is in the class, as you have seen just now, a sort of... I say "a sort of", because he is Dutch but he actually lives in Brussels, so you could say he's from Brussels, in short I don't know him very well yet. He's a "case", yes Mr. Dutch please, come on over. There you go. Are you hoping that I will welcome you sir?

Will that help you?

Music, for the time being it's music, lots and lots

Yes for the time being, but what do you do... Not a lot

Someone in the class has a cold, have they! Does anyone have a throat lozenge? Ah that's [not understood] who's coughing, good! No, you said to me: I don't do anything, that's it, something like that.

For the time being, apart from music, I do nothing.

You do nothing. And what did you do before you did nothing?

I studied for 3 months.

You studied for 3 months, that's not very long, what did you study?

Yes, for the time being, very.

For you are 20 years old, at the moment, I have the impression that you are happy. How did you come to us here, sir?

By train from Brussels...

No, that's not what I'm asking.
Laughter

No, how did you come here to me, did you want to come?

Ah I have, there is a friend who told me.

Who told you: go to Mireille!

He said, it's good at Mireille's?

But it's not like at Lorette's, be careful eh! Good, show me Mr. Dutch a little piece of music, a song, whatever you do, whatever you like most.

Thank you sir
(Applause)
Good, I would like a little piece in Dutch please!
(Music)

Good, can I have a little piece in French?

Wait, I know that it's a famous song, and it's been rearranged for you a bit.

Yes, yes, since that made me think a lot about the town where I came from a long time ago, which really has some special features, especially the language, and the way of it's alliteration.

Because I have heard it sung completely differently!

Yes, by another singer, yes!
(Music)

Good, I wanted to hear a little piece, and I wanted everyone to listen.
Applause