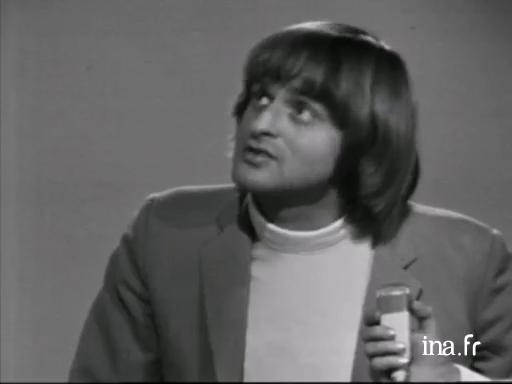 On Mick Micheyl's set, Dave presents himself and explains why he chose to leave his native Netherlands. He discusses his early days as a singer, when he was travelling France's southern coast in his boat. He then responds to the guests' criticisms and remarks regarding his long hair, his glasses, his accent and his fame in Holland.

Born on 4 May 1944 In Amsterdam, Dave (real name Wouter Otto Levenbach) was barely 20 years old when he left to try his luck in Paris. He met producer Eddie Barclay there. In 1969, he represented the Netherlands in the Eurovision Song Contest (he finished third), and once he got back to Paris, he was engaged from 1971 to 1974 in Godspell's musical comedy troupe.

However, it was in 1974 that his career took off when he sang two international successes in French (the Rubettes's Sugar Baby Love under the title of Trop beau and Del Shannon's Runaway under the title of Vanina ). Success was sudden (more than a million 45s sold) and Dave shot to stardom in 1970s French variety music. He had multiple hits ( Mon Coeur est Malade, Dansez Maintenant ) and at the end of 1975 he released his first full record, Du Côté de Chez Swann. Dave reached the summit of his popularity at the turn of the 1980s (Lettre à Hélène, Comment ne Pas Etre Amoureux de Vous ) and then slowly slid towards anonymity.

It was only towards the end of the 1990s that he made his comeback on stage with two autobiographical texts (Around Where I Live (1997) and Soit Dit en Passant... Mes Années Paillettes (2003)), a few TV shows which he hosted, and the recording of a few new albums (Soit Dit en Passant (2001), Doux Tamtam (2004) and Tout le Plaisir a Eté Pour Moi (2006) under the name of Dave Levenbach).

Was that a G sharp, then?

Ah yes that was a G sharp.

Had to do it, didn't you! Ok, I'm glad that you've heard Dave, I would now like for you to tell us about yourself.

So tell us, why did you, leave Holland?

Well, I was, I was fed up being there, I bought a boat to look for the sun. Because during the 21 years of my life, I wanted the sunshine which was missing at home. So with a friend, who I had the good fortune of meeting, I bought a boat, left, went down to the Mediterranean, and travelled round. And that's where singing came in order to eat, in order to buy oil for the engine, I sang. I sang in bars, that is, on the terrace, in winter when it was too cold, inside the nightclubs. And that worked very well, but one day, there was no reason to stop, but one day I returned to a little port next to Toulon, and I fell in love with a Breton.

With a Breton boat.

Yes because otherwise he would have had a round hat, wouldn't he.

And in order to buy it, well I bought it straight away, but I had to pay for it afterwards, when you buy something, it's a problem, and there was the problem that you perhaps know already, in any case, there are definitely some spectators who know about i

Yes, we know about that.

I had to pay the bills. So, I couldn't do that by working in the street, you earned enough to eat, to yourself...

For the oil but not for the bills.

But not for the bills.

So what did you do?

But I had, I was late, very, very late and they wanted to take the boat, and I said: Ok, there's a solution, everyone says that I sing well, I'll go and see a record company and see if they can pay enough to keep the boat, and I stayed with that company.

So you came to Paris to pay for the boat, the bills and the oil?

Yes, and it worked!

If this boat hadn't existed, this boy would not be singing.

And you sing well.

I wanted to ask him if he writes, composes and interprets?

Yes, yes, I write my own songs.

Because I'm too lazy to learn other people's songs, I think.

That's difficult though, it really takes a lot of time to write songs.

Yes but, I prefer to write songs on [not understood], it's a way of expressing yourself.

You know he'll sing after he's been asked this question.

I wanted to ask him something, Mick, a short while ago, you asked him his age, and sadly he responded 24. Why, is 24 too old or too young?

He started at 14 years of age.

So he did, he sang from 10 years of age and in an unusual way really.

He's an old man, a veteran of the job.

He's an old sea dog. Are there are other things in your life which interest you apart from the boat?

Mr. Amoroso, doctor Amoroso who is the most famous psychoanalyst in Europe I believe.

I would just like to ask Dave, he just stated that he had a little emotional breakdown, he loves this childhood to which everything seems to hold on to. I would like to ask him, what's the key to this magnificent hair, unusual for people of your sex, for example, is it...

Not that unusual, in any case let's now say abnormal, is it to do with business? Is it a desirable opportunity or on the contrary is it an involuntary response to the male sex? In a word do you deny it or...

That's what I wanted to say, in a word the character that we listened to a while ago, would he sing with as much talent, as much conviction, as much dynamism if he had, let's say, a shorter hair cut.

Well, yes, but I wouldn't be as happy because I very much like having long hair, it's important for me to like myself because I have to do my hair, shave, I see myself all the time. And I am happy like this, so there is no other reason for it.

So basically, it's not to please the ladies in the crowd, but to please himself.

Yes but even so it's something very important.

It's narcissism. And what if we prefer you with...?

And what if I take some scissors and cut your hair right now?

You'll see, sometimes, there are woman of course, well girls, who want to try, so I put it back, you're not going to do it now, and it's, they'll say: no, no, leave it like that.

I would like to know why you wear glasses?

Because I can't see without them.

And when you sing, do you need your glasses.

I'll tell you, I try, if I take my glasses off, I look as if I'm looking for something and in fact I'm not looking for anything at all.

But you no longer see the audience, that way you could imagine...

Yes you do see a bit.

I would like to know if you consider your accent a handicap or an advantage to your career in France. That is, in 10 years, will you still have the same accent or will you loose it? Because accents often bring success in France.

Yes, but... I would like to loose my accent, I don?t like it that much that you can tell straight away that I'm a foreigner, and besides when I sing, I have time to work on my accent, by not speaking naturally. So I hope to have less and less, in, on the record already, it's already more difficult to tell, you can repeat it and everything. Speaking, well, you say it's nice, I don't know, I really want, but I don't want to be so Dutch. It is necessary to say again because I have not been in France very long, but the fact that I am Dutch, for me is of no importance.

And in Holland, are you well known?

Because of the Breton.

I just want to ask him what became of "the Breton"?

What has become of "the Breton"!

Unfortunately it's always elsewhere, I have quite a long contract with my record company, but I can perhaps go into hiding before, I don't know.

I'd also like to come back to the glasses, and the fringe, I find that it hides your face and it seems to me that the two are too much! There, much better.

I am going to sing in a moment

You can ask Jean-Claude who is nevertheless err...

He is much better without glasses.

Good haircut, he can give us his opinion.

But it doesn't offend me

Ah no, no, not the haircut either for me, but the glasses and the hair is too much.

It's too much yes, because you no longer see your face. I want to be a singer not to look pretty.

Without being pretty, you have very beautiful blue eyes, you don't have to hide them.

So you are typically pretty, that contradicts what you said.

What would interest me, is rather to know how Dave made contact with the record company?

I was on the metro, it was the 7th of December at 5 o'clock, and I had to pay before the post offices closed on the 7th of December, I went to Sablon and I found a record company. I sang 2 songs, one of which I gave to Nicolas [not understood] afterwards who recorded it, which brought in authors' rights and the other to [not understood] and the gentleman there said: good, I'll give you a contract. I said: yes, that's not all, I also needed "that", and he give that too.