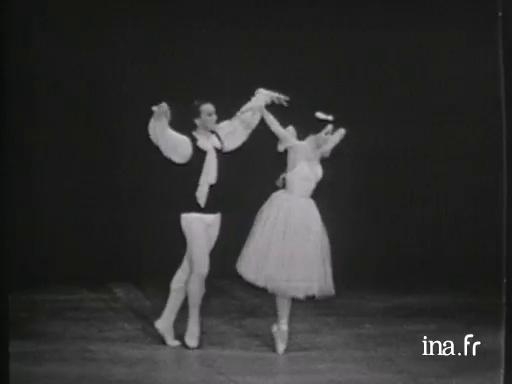 From the Paris sports palace, the Bolchoï ballet theatre: pas de deux over music by Chopin, danced by Svetlana Adirkaieva and Maris Liepa.

Maris Liepa (1936-1989) was a Soviet principal dancer of Latvian descent. He studied dance in Riga and then in Moscow. In 1955 he worked at the National Opera of Riga and from 1956 to 1960 at the Stanislavski Theatre in Moscow. In 1960 he joined a tour of Poland with the Bolshoi Theatre, then became a permanent troupe member. He performed several roles there from the classic repertoire under the direction of Leonid Lavroski and Iouri Grigorovitch from 1964. It was with the latter of these that he reached celebrity status by playing the role of Crassus inSpartacusin 1968. He retired in 1982.

From 1983 to 1985 he took over the artistic direction of the Sofia National Opera and in 1989 created his dance school. Apart from numerous Soviet Union prizes, in France he won the Nijinski and Marius Petipa prizes. His son Andris (born in 1962) and his daughter Ilse (born in 1963) are also dancers.