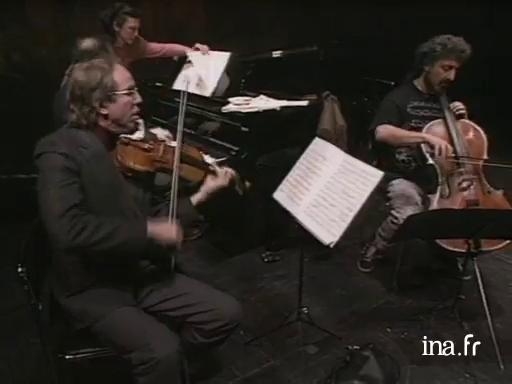 Born in Riga in 1947, he studied violin with his parents, professional musicians, and then at the Riga Conservatory and finally in Moscow where he studied under David Oistrakh. He won prestigious competitions and his career began: concerts in Germany, the United-States... in 1981 he founded the chamber music festival in Austria which became the Kremerata Musica. He then created Kremerata Baltica with which he'd travel the world. His repertoire is very large: baroques, Mozart, the romantic repertoire, but above all, musicians of the 20th century and especially the young contemporaries: Nono, Glass, Schnittke, Pärt, Rota, Gubaidulina. He played with the great musicians of his generation like Argerich, Karajan, Abbado, Ozawa and Harnoncourt and his discography is comprehensive. Gidon Kremer is a non-conformist. His tastes are eclectic, but we're always taken aback by his astonishing technique, the sonority of his Amati, his imagination and elegance: he's one of the greatest violinists of the 20th century.

And now, some music to finish up. The portrait of an unusual violin player. His name is Gidon Kremer. He plays what he likes, and doesn't care about trends and even goes as far as choosing his audience. Monique Atlan.
(Music)

For this new series of concerts, Gidon Kremer wanted to beat the encore of all his Moscow musician friends. Like a nod to his origins, a sign of friendship from this great violin player that's now considered to be one of the most talented ones of his generation, but also to testify to his way of approaching, of living music like an adventure.

I think that taking risks, is something that interests me, because if we take music seriously, it's always a very risky situation even if we play with people that we know.
(Music)

For Gidon Kremer, each rehearsal gives way to the unknown.

I think it's very important to look for things for the process, not showing up at rehearsals with a formula that's ready.
(Music)

This requirement that he imposes upon himself, he hopes to find it in his audience as well.
(Music)

There are too many people that think that music starts when you're just able to connect with a melody that you know well, but I think that's a misunderstanding. The real reasons to make music, is to look for a language, maybe not a language that we know well but a foreign language.

A foreign language accessible to all simply because it's music.
(Music)