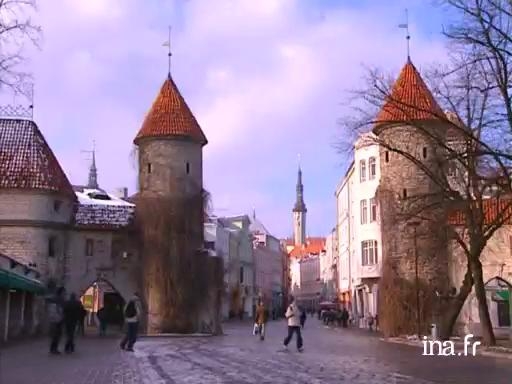 Successively invaded during the past by the Danish, the Swedish, the Russians, the Soviets and the Germans, Estonians are afraid that by entering the European Union they will be lost in the crowd and will lose their cultural identity. Conversations in Tallinn with historian Marek Tamm, convinced that joining the union will, on the contrary, preserve the country's identity and with Arnold Ruutel, Estonia's president of the republic, regarding the ideas that a few intellectuals have regarding a radical change of identity.

Estonia, a Nordic or Baltic country? Since the end of Soviet rule and new independence in 1991, the question of identity is at the heart of the national debate and feeds a few lively controversies. Traditionally associated to their Lithuanian and Latvian neighbours in the south to form the group of "Baltic countries", certain Estonians would rather claim an attachment to Finland and Sweden that border the country to the north and to the west.

Linguistic analysis would tend to agree with them as Estonian, like Finnish, belongs to a language family called "Finno-Ugric" and thus isn't Baltic from a linguistic point of view. On the other hand, Geography brings Estonia naturally closer to a "continental" culture rather than an "insular" one.

The question of national identity resurfaced at the moment of Estonia's entry into the European Union, the 1st of May 2004, and will be further fuelled at the time of the adoption of the euro: the original deadline for the 1st of January 2008 has been pushed back to an undetermined date. So for now the Estonian crown has still not finished soldering the identity of this young nation.

We begin in the North, with Estonia, 1,400,000 inhabitants, 13 % unemployment rate, capital: Tallinn. This Baltic State was invaded by the Danish, dominated by the Swedish, then by the Russians, the Soviets, and finally the Germans. Estonians have been independent for only 12 years, and some worry that their country will once again lose its own identity, drowned within the European mass.

The old citadel of Tallinn witnessed a large number of invaders. Soviets, Germans, Scandinavians, all had their place in Estonian history. Strengthened with their newly found independent, the Estonians fear a Europe of 25, in which their language and culture would be drowned in the larger mass. For this historian, Europe is on the contrary an incredible window for the smaller countries.

We have the example of Ireland or Finland who have been members of the European Union for several years, and it appears rather that their identity has been reinforced, better preserved within the European Union.

This debate even reached the presidency, when Estonian intellectuals proposed a radical identity change. Their idea, to change the name of the country, to Estland, in order to break with the other Baltic countries, and to anchor Estonia within Nordic culture, also wanting to adorn the national flag with a Scandinavian cross.

I think that it is a joke, and that those who launched this idea are fantasists. Personally, I think that all that symbolizes the Nation and the State belongs to our history and our people, so it should not be changed.

Yet a poll shows that a majority of Estonians want to change the image of the country in order to avoid being confused with their Baltic neighbors, Latvia and Lithuania.