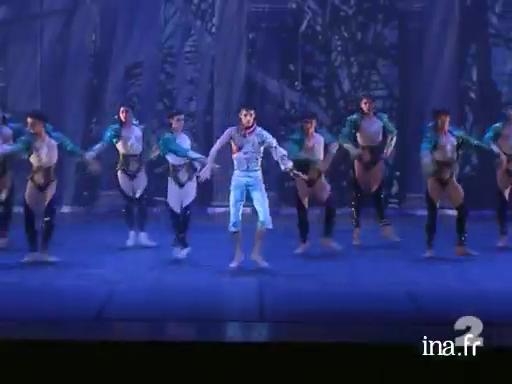 At the Opéra de Paris, Rimsky-Korsakov's symphonic ballet, Shéhérazade, has been revisited by Andalusian choreographer Blanca Li, a very refined show that called on designer Christian Lacroix for the costumes.

Choreographer, dancer, director, Blanca Li was born in Grenada in 1964. She drew her inspiration from Arabo-Andalucian culture and mixed in classic and baroque modes of expression as well as hip-hop and flamenco. At 17 years old she attended Martha Graham's lessons in New York. She created her first contemporary dance company in 1992 and appeared at the Universal Exposition in Sevilla before setting up in Paris in 1993, producing eleven shows, of whichMacadam-Macadam(1999) became an international reference for hip-hop. Blanca Li was solicited outside her company to choreograph ballets and operas, notably the Opéra Garnier (balletShéhérazadein 2001, opera balletles Indes galantesin 2003), at the Opéra Bastille (operaGuillaume Tellin 2003) and in the Berlin Ballett-Komische Oper which she directed for a year (balletLe Songe du minotaurin 2002).

She turned her hand to cinema (Gazon maudit, Nettoyage à sec) and in 2002 completed a feature film called,Le Défi, a hip-hop musical comedy. In 2006, she was named the artistic director at the Andalucian Centre of Dance in Sevilla.

At the Paris Opera, Shéhérazade, Rimski-Korsakov's symphonic ballet was revisited by Andalusian choreographer Blanca Li. A very refined show that calls on clothing designer Christian Lacroix for the costumes. A dance of the seven veils with bright colours and Oriental lines. Estelle Colin, Didier Dahan.
(Music)

A choreography that was made for the Opéra de Paris, and which mixes classical with flamenco.

For the first time, I especially worked with point shoes, this means that I brought in moves that I usually do in choreographies with my dancers.
(Music)

The characters that come from his childhood tales are evidently closer to Arab-Andalusian culture than Oriental culture.

It's really a mix of all of the culture that Blanca Li had, meaning flamenco, a bit of [MISUNDERSTOOD] technique and also street dance, she did a bit of hip-hop and all that.

Another source of inspiration for the choreographer is the costumes that were recoloured by Christian Lacroix for the event.
(Music)

Around fifteen costumes in all that transport us to the light of the orientalists.

I was interested right away, first of all in her development of the colours, since what she showed me at once on the first day, during that fine lunch, was already an album of colours. Since she wants it to be the light that emphasizes the whole ballet.
(Music)

A voluptuous Christmas extravaganza that gives you the impression that you're browsing through a picture book, a picture book where the spirit of dancing and the genious of coulours intertwine.