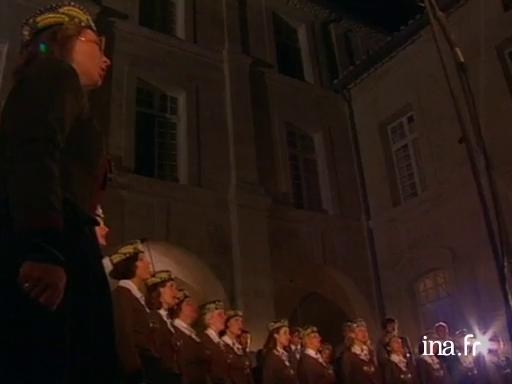 Live from the St Louis Cloister in Avignon , the Latvian choir perform a traditional Latvian Song, The Song of Roses.

The Latvian Radio Choir (Latvijas Radio Koris) is a veritable cultural institution in a country where choral singing has played a determining role in the formation and consolidation of its national identity throughout its eventful history and more recently during the 50 years of Soviet domination.

Founded in 1940, the choir only has 24 members, each of which selected in 1992 under the joint direction of Sigvards Klava and Kaspars Putnins. Alone or in collaboration with prestigious orchestras, this virtuoso formation takes on all repertoires with variable geometric configurations (from a small group of six singers for the Renaissance madrigals to the monumental numbers of 90 singers for romantic works of great volume), showing a quite particular preference for contemporary music where its technical ability works wonders.

The Latvian Radio Choir reserves a large part of its work for the performance and recording of original work by Latvian composers and thus acting as a safeguard for popular tradition that belongs to their national heritage.