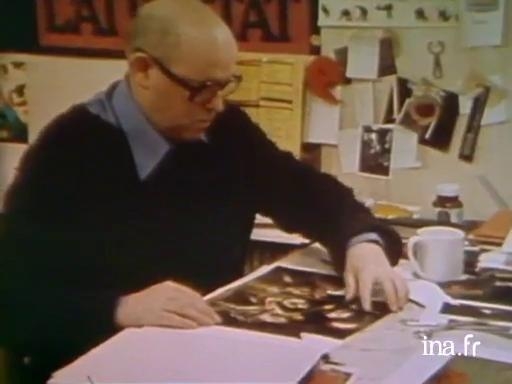 Reportage in the workshop of Roman Cieslewicz, famous poster designer, who talks of his job and the power of the image.

Roman Cieslewicz, the renowned graphic artist born in 1930 in Lvov, Poland, remains one of the most famous poster designers of the Polish school. Trained at the Cracow Academy of Fine Arts, the Francophile settled in Paris in 1963, and succeeded, thanks to Peter Knapp, in securing a job as a layout designer at Elle magazine, where he quickly became the artistic director. Influenced by surrealism and by Pop Art, Cieslewicz made posters while paying particular attention to the framing and composition of them, and then focussing the colours.

With no regard for value judgements, he worked equally with press, publishing, advertising and cultural institutions (from 1975 to 1983 he had a close relationship with the Georges Pompidou Centre, for which he made many advertising items). Simultaneously, he continued devoting himself to his other passion: collage and photomontage, searching for strong and unusual visual contrasts.

Nourished by the artist's great visual culture, his works were exhibited in galleries and museums. In 1995, one year before his death, the Georges Pompidou Centre dedicated an important retrospective to him.

I find the photo to be a most interesting subject, the most magnificent in the world, which has provided so many possibilities that perhaps you wouldn't imagine today. The tools of my trade are, scissors, glue, paper, in other words all the simplest things that you can imagine. These are the XVIth century tools, for creating a new image.
(Music)

After 1930, in France, after Cassandre, after Colin, after Savignac, after Andre Francois, who are still, not all but 90% of them are alive, fortunately, not a lot was going on after the war.
(Music)

It's very difficult to tell when you become a poster artist. I finished school in...1954, I got my diploma at Cracow, in Poland, and from then on I worked, but poster artist, I did many things, I did, I did covers, I did page layouts, poster artist maybe. This issue of my love, for my love, yes, I repeat, for very strong and very sharp compositions and because I was told that I was perhaps valuable as someone who could convey a message as a poster artist. But I still don't know even now whether I am a poster artist, I did, posters, I did more than 400 posters during my life, during my life, but I don't know what a poster artist is, that's all. A poster is a great idea, that's the main thing, basically, because an idea can excite, can cause intrigue, it's very important. Moreover Marcel Duchamp said already: an image which does not arouse, is not worth anything. And he was right because you are surrounded by images, you are swallowed up by advertisements, by tens of thousands each day. You like them, you might not, but these images can't be neutral. It's not possible. They need to shout out, they need to cause intrigue, they need to do something to, to... make you think.
(Music)