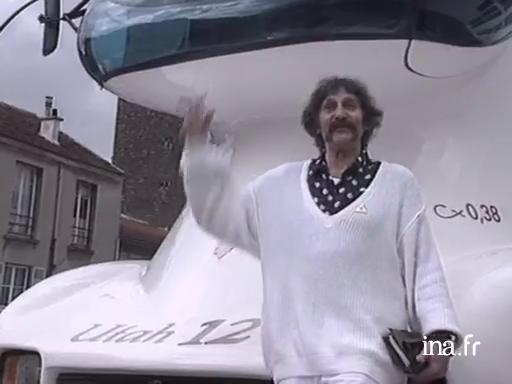 Portrait of the prolific German designer from Italy, Luigi Colani.

Sensuality, curves and round edges are the primary features of German designer Luigi Colani's artistic work. He is able to give a poetic dimension to consumption societies' technical and industrial objects.

Born in 1928 in Berlin, to an Italian father and a Polish mother, the artist was first educated at the Berlin Beaux-Arts school, before going to Paris in 1949 to study aerodynamics. During the 1950s, he shared his creativity with car manufacturers (Fiat, Volkswagen, Ferrari, Simca, BMW, etc...) and aviation companies (Boeing, Rockwell).

Luigi Colani pressed ahead so that natural shapes were respected as much as nature itself, and he made a name of himself as the inventor of bio-design in the 1960s: this trend didn't just seek to preserve the harmony of an object's curves, but promoted a better integration of the object within its environment, by optimising its ergonomics. He applied this principle to his design of Canon's T-90 camera. An original and provocative figure in Europe, Luigi Colani is considered a master of design in Japan.

Tomorrow in Pantin, close to Paris, the proposition for a highly unique exposition in the International Automobile Museum, including the presence of Luigi Colani. So Luigi Colani, his name may not mean anything to you, yet he is a designer, as it is said, a creator of extraordinary objects. Which Ivan Brazov proposes you discover in the sneak-preview.

Provocation, utopia, if the Italian Luigi Colani received for the last thirty years these various descriptions, he is considered today as one of the greatest designers of his time.

There is no straight line in nature. Look at the world, the celestial bodies, their trajectories in the universe, all this is oval, round. There is not a celestial body that is square wandering about up there.

The airbus, it is him who in 1970, when he was speaking of CX aerodynamics, no one would listen to him. And yet, Luigi Colani is always twenty years ahead of everyone else. He takes shapes from nature in order to use them in the field of automobile design as well as apply them to any objects that must move in space.

This truck here consumes thirty percent less than the truck underneath, the chassis... If a truck driver has four trucks, he works by ear, wonderful.

Luigi Colani escapes the established order. He stays in the margins, elsewhere, but far ahead of the game. One of his latest creations, a city within the city, in Japan, in Kyoto. The poetry of the designer, Japanese poetry, the lakes of the city create letters and the whole forms the most beautiful of words, "peace".