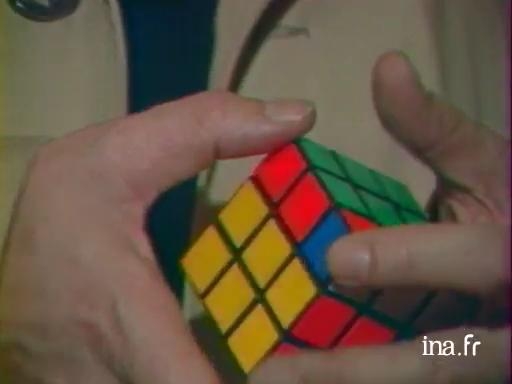 Report on the invention of the Rubik?s Cube, on the occasion of the inventor?s visit to France?s 1st Rubik?s Cube Championship. Interview with Erno Rubik on what motivated his creation of this brain-twister puzzle, 25 million of which have been sold worldwide. Testimonies by fans of the game.

A cube, six colours, 156 blocks, millions of combinations and as many exasperated players have tried to resolve the mysteries of the most famous of puzzles: the Rubik's Cube.

Invented in 1974 by Erno Rubrik, a young Hungarian architect graduate of 29 years old, the Magic Cube was first created to resolve a technical difficulty: how to attach 26 cubes and position them so they don't fall? Commercialised in Hungary in 1977, the game broke down borders in 1980, changed its name (Rubik's Cube) and soon became very popular in 1982 the year of the first international Rubik's Cube championship, over a million had already been sold throughout the world.

But the enigma of the Cube remained and in 1981, the mathematician Halberstadt proposed a solution algorithm while a young British amateur of 12 years old published a bestseller You can do the Cube, which sold one and a half million copies. Today, we can see many amateur videos on the sites YouTube or Dailymotion which reveal the combinations and prowess of passionate players. A cult object, it became a luxury object for its fifteenth birthday, when the diamond workers Cutter made a cube out of 18 carat gold encrusted in coloured stones (emeralds, rubies, amethysts...). Today retired, Erno Rubrik continues to encourage design creation in the sector of games, via his company Rubik's Studio.

Who would believe that this debonair and modest tourist is the envied, rich inventor of the Rubik's cube, a great discovery? Nevertheless, this is indeed Erno Rubik, the creator of this darned toy that either soothes or annoys, either way, tens of millions of hands throughout the world. In Paris for the first French Rubik's cube championship, this mellow Hungarian, who's a degreed architect and a decorative arts professor in Budapest, went on a pilgrimage to the Palais de la Découverte's math and geometry room, because out of 43 billion combinations, there's only one solution.
(Silence)

[Trans] At first, I built the Rubik's cube to help my students understand how to visualise space. Because, in general, when you consider regular geometric bodies, the cube has an ideal form whose multiplication allows you to fill out space in a continual manner. Or on the contrary: division through reduction. Which explains the six sides with nine facets, or, 54 facets total. I've brought joy to people's lives and I intent on keeping this up. Soon, the French will learn about my other inventions. I enjoy searching, thinking, and I want to continue doing this.
(Silence)

As far as royalties go, it's been said that they're in the billions of cents, so Rubik stays discreet and maliciously responds: money is around, I'm quite secure. With regards to his worldwide success, it's colossal: 25 million Rubik's cubes sold.
(Silence)

At first, I gave up on it because I couldn't figure it out. And then, when I picked it up again, I tried to find a method, and from then on, I dug deeper.

And after a year, is it still about searching? No, not really?

It's about searching for techniques to go faster, on a… something that we find often enough, a position that we often find. And then afterwards, it's about going as fast as possible;

How long does it take you now? What's your record time?

So what is in store for the Rubik's cube. Does it even have a future? For some, it's just a brain-teaser that happens to be popular right now. For everyone else, especially researchers, it's already a classic game. In any case, Rubikmania could eventually turn into Rubikphilia.
(Silence)