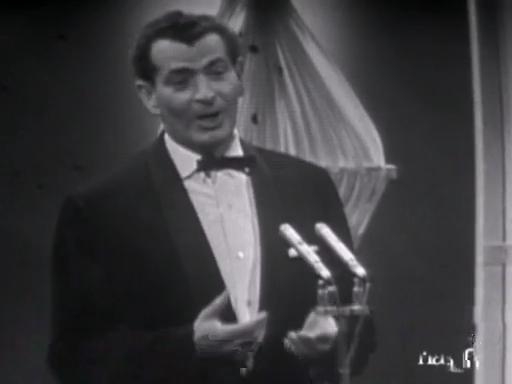 Camillo Felgen, performer of the famous hit Sag Warum in 1959 and presenter on Radio Luxembourg, representing Luxembourg at the 5th Eurovision Song Contest. He sings So Laang We's Du Do Bast.

Born on 17 November 1920 in Tétange in Luxembourg, Camillo Felgen, singer, actor and acrobat was first and foremost a man of radio: a (French) reporter as of 1946, and director and chief reporter, in 1958, of German shows at Radio Luxembourg, where he created the mythical Hit Parade show.

But it was with Sag Warum, a German adaptation of a Teddy Bears song, Oh Why, written and produced by Phil Spector, that Felgen gained international stardom, with the record selling several million copies throughout Europe. Later on, he was ranked 3rd in 1962's Eurovision contest with the song Le Petit Bonhomme, and at the same time he started his acting career in Germany.

In 1965 he became the presenter of Germany's Jeux Sans Frontière television game show, while simultaneously having a successfully lyric writing career under the fictitious name of Jean Nicholas, most notably adapting a few Beatles songs into German. He continued working at RTL and recording many albums throughout the '70s and '80s. He died on 16 July 2005 at the age of 85.