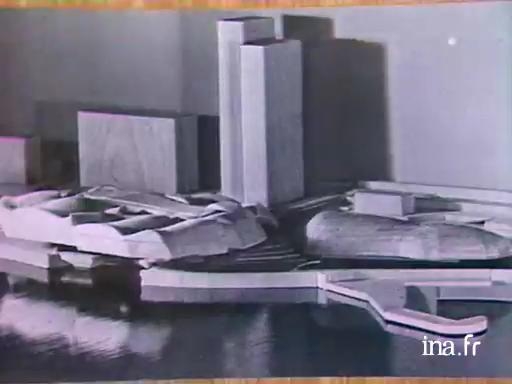 Retrospective exhibit on Finnish architects Raili and Reima Pietila's 34 years of creations, at the Clermont Ferrand school of architecture.

This couple of Finnish architects opposed modernism while seeking to develop the notion of rationalism into a more open, organic form, refusing the rigidity of their contemporaries' visions. Their architecture initiated the Alvar Aalto and Lars Souck style. Lauded by architecture critics Roger Connah, Malcolm Quantrill and Christian Norberg-Schulz, they set up their workshop in Helsinki in 1960. Prolific theorists, they pondered the question of national identity, exploring the Finnish language in order to generate the architectural form.

Heirs of 20th century expressionism, they explored the notion of "forme de la forme", seeking out relationships between practical and theory, through phenomenology of the place, the central theme to their preoccupations. They participated in the last congress of Team 10 and founded the reviewCarré Bleu. Architects of the Finnish Pavilion at the Universal Exposition in Brussels in 1958, Kaleva churches in Tampere and Lieksa, they conceived the whole residential area of Suvikumpu in Tapio Espoo and the Tampere library. They exported their work through the Finnish embassy in New Delhi and the Sief Palace in Kuwait City. Hardly acknowledged in Finland, their work was known to Frank Gehry and Steven Holl.

Raili and Reima Pietila's architectural works follow the same principle of freedom. Pietila's personal school is defined in this retrospective, which covers 34 years of creation: the absence of specific rules, architecture which is flexible and free from austerity, and which makes references to nature, to culture and to mankind. Rali and Reima Pietila believe that you have to adapt to the location and integrate the constructions to their geographic and cultural dimensions. This is especially striking in this Helsinki student dormitory, which is an inverted replica of the ground that existed before the construction.

[English] My wife is also an architect... [English] and she lives in an area with forests, boulders and springs, which is an inspiration for me. [English]

Does the world's architecture also respect nature or do you think that it's much more industrial?

[English] That's too bad. I'm disappointed that the ecological approach that I use in Finland... [English] hasn't yet been adopted by much of the world's architects. [English] I think that this inspiration from nature is the path that contemporary architecture needs to take and I think... yes, I believe I'm headed in the right direction.

What is the meaning of your trip to France, and to Clermont-Ferrand in particular?

[English] As a matter of fact, what I like here, is the scale of things, which is still human... [English]

and the harmony between nature and man.