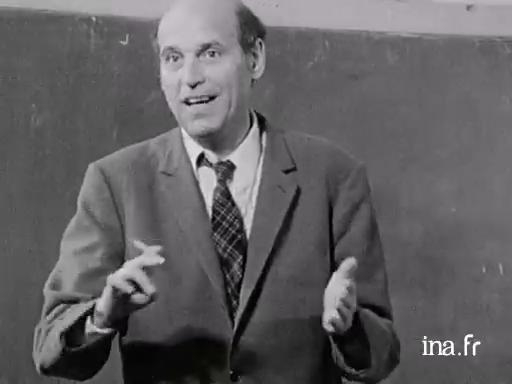 Yona Friedman, an architect born in Hungary, explains a project she conceived for an Osaka exhibit in 1970. Visitors of this exhibit will be able to choose their flat's layout and its location, and build their own town, which will be projected onto a screen as it is designed.

Utopian architect and Hungarian theoretician, Yona Friedman published more than he built. He participated in the development of the first residential Israeli colonies before developing, through his child-like drawings, an "achievable utopia" who's success depended on the will of the people. In response to problematic urban displacement, the central theme of the 10th CIAM congress, he proposed to put in place a "mobile architecture" composed of flexible autonomous compartments capable of carrying out constant transformations in order to insure social mobility. These cells attach freely to any point of a mega-structure raised 35 metres off the ground, supported by pylons of vertical circulation and guaranteeing connections for the necessary fluids.

The "Spatial City" conciliated mass-production and "habitat decided by inhabitant" while advocating "auto planning", leaving an open court for user improvisation. This framework, after having defined a "continent city" then a "private town", would become a "town of the third millennium", with a minimal impact on the countryside, using materials available on location, freeing the ground to enable its exploitation. Seasonal towns with migrating inhabitants save energy while offering an ideal way of life. At 95 years old, he showed a series of bridges over the Yang Tse Tiang, intertwined superstructures that house populations displaced by the rising of the waters.

Mr. Friedman, would you tell us about this machine for inventing apartments?

I call this a choice machine. In practice, we say that there are an incredible number of possibilities for apartments. You can make millions and millions. And if I make a whole repertoire, I will call it a menu of these machines, all possibilities are shown, from which anyone can choose anything, whichever one they want. It would have been a huge book, just full, with little plans. Instead of that, I make something like a typewriter. That is, that instead of the book, I made the tool which prints the book. And in this machine, there is a keyboard which shows the different configurations, the different forms, the different positions for the kitchen, the bathroom, the toilet, and everyone can use different keys on the keyboard, and print for themselves the apartment that they prefer. I will do the first experiments at the exhibition in Osaka in 1970, where this machine will not have more that fifty-three keys. With fifty-three keys, you can go for three to five millions different apartments. And each visitor to this exhibition will of course print their own apartment. After that, they arrive at a second machine. The second machine is a selection machine with which everyone will choose the site of their apartment within the town. That is to say such and such a block, and such and such a floor. And what's new about this infrastructure, that's what we call it, is that it prints their choice. If the choice is already taken, then the machine lights a little bulb which says: "please choose again". If the choice is free, the machine registers the choice and makes a record of the little plan of the apartment. The machine at the same time, checks that this person's choice doesn't block the access to anyone else's apartment. And does not block the light and the ventilation. And so at this exhibition, ten million visitors to this exhibition will print, building a town with ten million inhabitants, which is then displayed on a television screen, in front of the people who built the town.