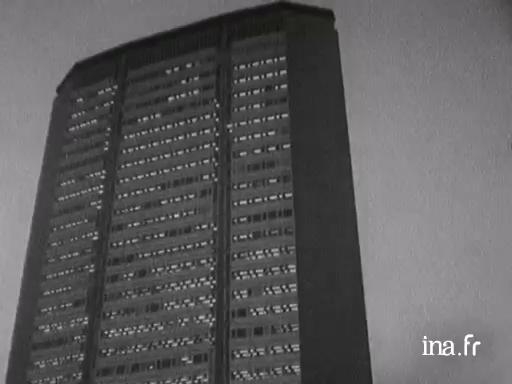 With the help of sketches, architect Gio Ponti explains the architecture that he dreams of for Milan.

Gio Ponti's architecture is intimately linked to his birth place, Milan, industrial capital of northern Italy, that he would equip with his emblematic building, the Pirelli tower. Designed with the engineer Luigi Nervi in 1956. Between neoclassical heritage of Mussolini's era and industrial style of post-war redevelopment, he developed a complex and rational language, similar to the ideas of the Novecento group to which he was linked. He promoted the ideas of his time through the architecture reviewDomusthat he created in 1928 and the Triennale of Art and Architecture in Milan which he was the director of. He designed the School of Mathematics of the University of Rome, the first Montecatini building and the Domusescomplex in Milan.

At the same time he helped to renew Italian design. Starting as an artistic director for Richard Ginori, he created furniture for Fontana, glass bottles for Venini and naval furniture. It was his Pavoni espresso machine in an industrial style that would make him famous worldwide, followed by his range of bathroom fittings for Ideal Standard while his Superleggera chair won the Compasso d'Oro, a prize that he had helped to create. He would train a generation of Italian designers between 1936 and 1961 at the Polytechnic School of Milan. He mixed design and architecture in his facades, notably the one at the Denvers Museum of Art, the Shui-Hing store in Singapore or even the laced facade of the Taranto cathedral.

That which I dream about?

Me, I dream of a Milan made by my fellow architects. It's so... I don't want a Milan made with low houses and a skyscraper here, another one there, another one there, another one there. It's like a mouth with a few very long teeth while the others are much shorter. Skyscrapers are very good when they're like neighbors with each other, like islands, like that. It works very well. And then, the others. It makes a landscape. And that, it isn't a landscape. It can be a landscape with clouds, with the sky, with the other houses which are low, etc..., that's what I don't say that I dream about, but that I say will happen there. If you will, the other cities have, like Paris, a river, like Paris, like Rome, like Florence, like Turin, have hills, like Rome, like Florence, like Turin, or else they have an ocean like Gènes and Naples, the ocean and islands and Mount Vesuvius even. And so God has really contributed to the beauty of those cities. But for us, for Milan, God hasn't done anything, nothing. So it's up to us for Milan to become a beautiful city. It's a question of creation. That's why architects who really love Milan, like all the Milanese, only wish for the possibility of making, of creating a beautiful city, because without them and without the Milanese, God is absent.
(Music)