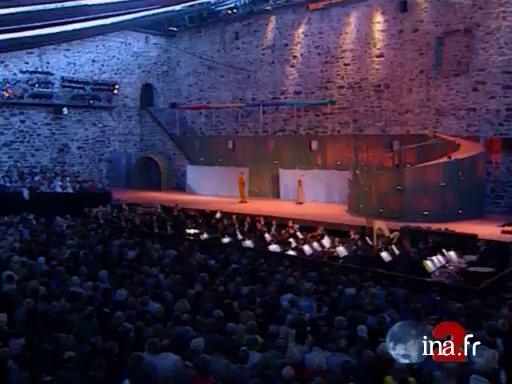 Report on the Savonlinna Opera Festival, an event organised and put on by choirs of volunteers that love singing and which attracts spectators from all over the world. Interviews with choir chief Kyosti Haatanen, director of communication Erkk Toüvanen, and excerpts of the Paillasse opera interpreted by Elisabeth Meyer-Topsoe and Sirkia Raimo.

Created in 1912 at the moment of the Finnish national identity's affirmation, the Opera of Savonlinna festival, which took place in the Romantic decor of the mediaeval Olavinlinna Castle (Olaf's Castle), was made to celebrate Finnish musical creation. Just one foreign opera, the Faust of Frenchman Charles Gounod, would find its place in the programme made by Aino Ackté, soprano and first director of the Festival from 1912 to 1917.

At the end of the First World War, Finland went through a difficult social and political period and the festival was left abandoned for nearly 50 years before being relaunched in 1967 under the form of an opera class for young singers. Since then, the festival has continuously developed, reaching an international audience attracted by the popular dimension of the festival and the high demands of the program and performances. The resident companies, regularly organised, favour contemporary creation and every year several "Premieres" are organised on stage to suit all interested, whether amateur or professional.

Let's finish up with the Savonlinna Opera Festival in Finland. In this country, the voice is written in two different ways: first, it's singing that allowed the Finns to express themselves during the Russian colonisation. It's also a way to have a festival. The fees are the same for all participants, and this celebration only costs 32 million francs, the cheapest in the world. Report by Geneviève Moll and Bernie Mériaux.

The little town of Savonlinna, in the heart of Finland. The opera festival takes place in this XVth century castle. Here, during the summer, 70,000 spectators come from all over Finland but also from all over the world, to listen to one of the 6 operas on the programme.

I come from Japan.

Oh really, from what city?

We come from Canberra.

I am the director of the Bolchoï theatre.

This year, Savonlinna has created a new Finnish opera and performs a very modern version of "Paillasse".
(Music)

These choirs, of exceptional quality, made up entirely of volunteers, are one of Savonlinna's celebrities, because not once does the fact that they are volunteers affect the seriousness of the work done here.

[Finnish] Here, music is a tradition. The members of the choirs are so enthusiastic, and want to sing so badly, that money problems practically never arise.
(Music)

And everyone, from the biggest stars to beginners, receives the same payment.

We pay everyone the same amount. And if they come, great. If they don't, too bad.
(Music)

And the biggest ones come. That's why, each night, from 7 July to 4 August, the 2,300 seats of the Savonlinna opera are selling fast.
(Music)