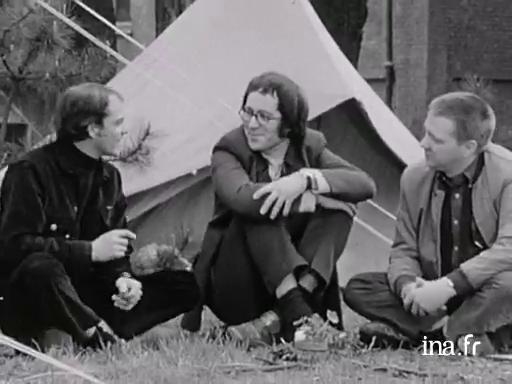 Archigram is first the title of a British magazine from the 60s, published in 9 issues from 1961 to 1974. Started by six architects, Peter Cook, David Greene, Mike Webb, Ron Herron, Warren Chalk and Dennis Crompton, the review would turn out to be legendary. The middle of the 50s brought with it the peak of mass production. England was invaded by American culture, inundated by its industrial products in screaming colours, sub-cultures of industry and entertainment, film, rock and roll and other derivatives of hyper-consumerism.

Following in the footsteps of Richard Hamilton, the Independent Group artists, from which Reyner Banham and the Smithson's research, Archigram opened up architecture to pop-culture. Its strong iconography, inspired by science-fiction and comic-books, is an indispensable support for its ephemeral architecture of hobby and pleasure. The beatnik romanticism and the legend of an individualist, nomadic population that technique will liberate from sedentarianism and weightlessness haunts their collages. Their futurist visions are marked by the launching stations of rockets at Cape Kennedy. Their slogans revolve around the playful, disposables, robots, containers, events, connections, the instantaneous, emancipation, inflatable... Remembered for Living city, their only common exhibition at the ICA in 1963, Plug-in and Walking cities and their two major media successes, Beyond Architecture in 1967, then Instant City.

People always use characterless symbolism. Some use toilet paper, others flush the toilet. But at the end of the day, they play the same classic symbolism game. [English] It's like a game of cards, you see what I want to do. Everything is extremely symbolic and virtual. [English] We, all that we want, is to abolish this symbolism within architecture. Moreover, we also want to sort out the social situation of all this symbolism. And you will see in forty years time. Our architectural design takes into account above all intelligence. This involves you, as we say in English, keeping your ear to the ground. For if you decide to turn a deaf ear, or if you don't want to understand certain things which in your opinion are the only worthwhile things, you will never see all the possibilities. Us English are very aware of that. For our country is a very industrialised country, you see what I'm saying. And we have to use all our intelligence to survive. This notion of intelligence is crucial for us, for it involves being able to recognise more than just one group of determining factors. It is necessary to know how to take into account all possible factors, the possibility of maybe combining them, making a compromise, and if need be, finding a hybrid solution.