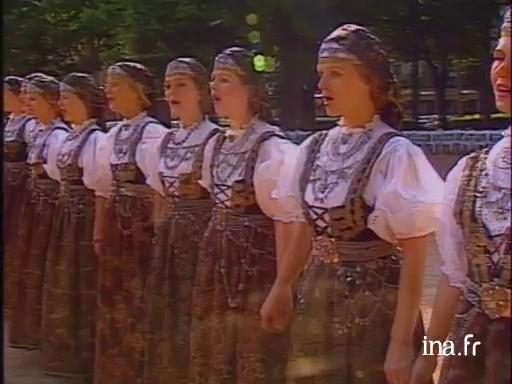 Report on the Mazowsze national Polish ballet, which carries on Polish folk tradition and features 130 singers, dancers and musicians.

In 1948, a decree by the Polish Minister of Culture authorised the formation of a folklore ballet promoting traditional Polish culture. Professor Tadeusz Sygietynski, composer, and his wife Mira Ziminska-Sygietynska, both passionate about folklore, formed the National Ballet of Poland Mazowsze, Song and Dance Group. They recruit young singers, dancers and musicians from towns and villages in the Mazowsze region, located in the centre of Poland. Since then the repertoire has spread to all Polish regions. In 1954 the ballet played for the first time in Paris and seven years later it gave nearly eighty performances in North America. The ballet is today made up of around a hundred artists and has given over six thousand performances throughout the world.

The national Polish Mazowsze ballet got its name from the Polish region that it's from, located in the centre of the country. This folk ensemble is large, since it's made up of 130 artists, including singers, dancers and musicians. The national ballet represents Polish folklore throughout the world. And now, they're returning from a 3-month tour in the United States and will perform in Germany shortly. Mazowsze's company has been around for 35 years. Two numbers are revealing: during the 2-hour show, more than 1,500 colourful and authentic outfits are worn by the artists.
(Music)