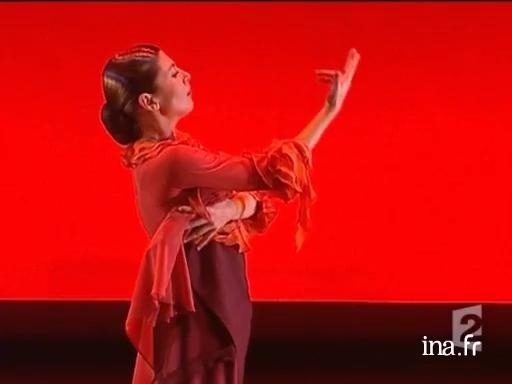 Report dedicated to the flamenco show created by Andalusia's Sara Baras, at the Théâtre des Champs Elysées, in Paris.

Sara Baras, flamenco choreographer and dancer of international renown, was born in 1971 in the province of Cadix. From eight years old, she practised dance in the school directed by her mother, Concha Baras. At 15 years old she went on stage and received in 1989 the first prize at the Gente Joven competition. She led an international career, first as at the former in shows by Manuel Morao, Paco Pena, Merche Esmeralda, Antonio Canales and in the flamenco company of El Güito. In 1992 she performed in New York and in 1995 she toured Asia for six months (Japan, Korea, China). She received the Madrono Flamenco prize in 1993. In 1997 she founded Ballet Flamenco and the following year her first choreography, Sensaciones, was created in Murcia. Her second show, Cadiz - la Isla, was welcomed in 1999 at Sadler's Well in London, a high place of contemporary dance. In 2007 she created a choreographic adaptation ofCarmen.

And to contrast with the cold outside, a short pause for flamenco at the Théâtre des Champs-Élysées, in Paris. A choreography created by Andalusia's Sara Baras surrounded by a dozen dancers and musicians. Abdel Mostefa, Patrice Brugert.
(Music)

Forget about Paris, you're in Andalusia.
(Music)

Forget about winter, you're in an arena, under a red hot sun.
(Music)

Lose yourself. Immerse yourself in flamenco, with eyes closed.
(Music)

Hidden in the shadows, you're on the lookout, ready to pounce upon what these singers call the Duende.
(Music)

This moment of grace, these exceptional seconds.
(Music)

[Spanish] I'm always trying to find the Duende. I'd like to find it every day, but it's impossible. This magic, you have to create it.
(Music)

How to you search for this Duende, the very essence of flamenco, on a large stage? The purists would say that it's impossible, as if Sara Baras, born in Cadiz, a flamenco dancer at age 8 had turned her back on tradition.
(Music)

[Spanish] There were people who insisted that we couldn't dance flamenco with all of these lights in a large theatre, only in small places. Apparently, they've now changed their minds.
(Music)

Since then, Sara Baras travels with her flamenco to theatres all over the world and one day, she hopes to plant her banderillas right inside of your hearts.