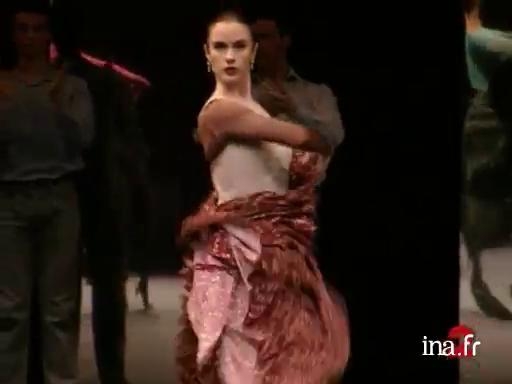 Commented excerpts of Antonio Gadès's Carmen show at the Palais des Sports in Paris. Report from Madrid showing Gadès working with his company. Interviews with Elvira Andrés, ballet master, and Gadès that highlight the high standards he requires. His final project before she quits is directing a Don Quichotte show.

Antonio Gades was born in 1936 in the province of Alicante in Spain. Dancer and choreographer, he revolutionised flamenco by brilliantly bringing a touch of the contemporary to the popular tradition, mixing Andalucian folklore and ballet. From 16 years old, he was in the company of Pilar Lopez whom he quickly became the main dancer for. Talented, rigorous, inexhaustible, the artist created his own shows from 1961. At the beginning of the 1960s he became the darling of Catalan intellectuals (notably Miro and Tapies) and from 1963 he travelled the world from la Scala in Milan to New York where he was at the Universal Exposition in 1964.El Amor Brujo,Bodas de Sangre(1974) andCarmen. Antonio Gades died in 2004. A foundation bearing his name is now the ambassador of his work throughout the world.

Flamenco is an art. Antonio Gades and his troupe, who hadn't come to Paris in 12 years, are currently performing at the Palais des Sports. A red blooded Carmen. Caroline Laudrin, Didier Dahan.

Antonio Gades's women all have a Carmen-like appearance: proud, sensual, passionate. The tempo is frenetic, the decor without frivolous tricks.
(Music)

Return to Madrid, in a very old garage. This is where, in small groups, the company's dancers are rehearsing. Antonio Gades likes to take his time. In his 45 year career, he's only created 5 ballets. Each time, he withdraws himself from the world. Two years later he comes back. Everything is thought out, everything is written.
(Music)

[Spanish] It's very hard, because, beyond the technical difficulties of dancing, you must not lose sight of the dramatic and choreographic intensity, He's very demanding. He wants it all. He wants it all.

Whether you call it classical, modern or flamenco, dancing has, everywhere, the same requirements. Gades's only motto is work. Always more to give your best. He travels the world with his 34 dancers. Throughout the years, he has become the representative of an entirely Spanish culture, the ambassador of flamenco.

He makes you study a lot, because it's the culture of a people. It's very serious business. Making a show to make money, that's where an entire civilisation... You have to treat it like something dignified and not pimp it.
(Music)

Before completely retiring, Antonio Gades should stage a final ballet, Don Quichotte's. Then, the man promises to live, to live intensely like his heroes do: with passion.
(Music)