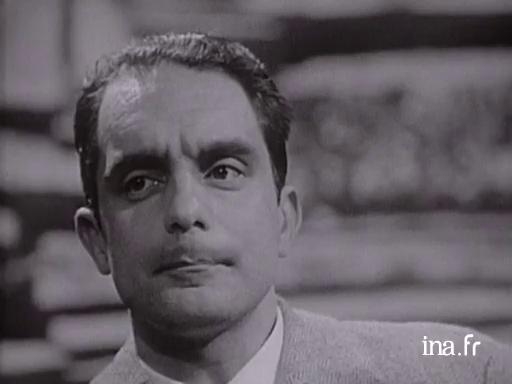 Conversation with Italo Calvino, on a stop in Paris, regarding his novel The Baron in the Trees. The writer then discusses two of his previous stories, The Cloven Viscount and The Nonexistent Knight, which he expects to unite as a trilogy entitled Our Ancestors.

Italo Calvino (1923-1985) is one of the XXth century's most original Italian novelists, with his unbridled imagination and his strong willingness to renew literature.

He was born in Cuba, which he left during his childhood to go to Italy. Forced to join the Fascist armed scouts, he joined the Resistance in 1943, while simultaneously continuing his literary studies. In 1947, he published his first novel, The Path to the Nest of Spiders, which talks about the vision of a child regarding the Resistance. We already see a lyrical and weird world, which characterises Calvino's universe. He then publishes the famous Our Ancestors trilogy, made up of three novels, The Cloven Viscount (1952), The Baron in the Trees (1957) and The Nonexistent Knight (1959), which are comparable to philosophical tales.

Living in Paris, he joins the Oulipo group (Workroom of Potential Literature) in 1964, which Queneau and Pérec also belong to. Amongst his works, 1979's If on a Winter's Night a Traveller best illustrates the precepts: made up of ten beginnings of the novel, Calvino's work never stops addressing a character-reader, taking him aside and integrating him into the tale as a character. At the same time, his interest in natural sciences and sociology never ceases to grow. This had an influence on his work entitled Cosmicomics (1965), a collection of scientific-fantasy tales. He lived the rest of his life in Italy.

Max-Paul Fouchet talked to you about this book but Italo Calvino happens to be in Paris, right now, so I thought that it would be a good idea to invite him tonight. Here, in a nutshell, is the story of his book. The scene takes place in the XVIIIth century, in a country that is rather imaginary. The Baron Laverse of Rondeau has three children: two boys, one girl. Côme, the elder of the two boys, one day, at the table, refuses the snails that he is given. He is asked to leave the table. He finds sanctuary in a tree. He spends the day there, as well as the night and the following day, and from then on he spends his entire life in the trees, perched. Without leaving the trees, he'll read, he'll love, he'll be happy, unhappy, and he'll only touch the ground upon his death. Italo Calvino, can you give us the reasons for such behaviour, for such a way of acting?

I thought of the story only because the image of a young man who lives in the trees and doesn't come back down to the ground, was an image that obssessed me for a long time. But I also think that there's a significance, a significance...

Ok. But is living in the trees, is that the same thing, for example, as isolating oneself in an ivory tower?

No, no. I'm against such an interpretation because my character has a life that is close to the life of those times. He participates in the life of his times. He participates in the struggles of his times and he loves and he doesn't refuse himself anything that is a part of men's lives. Maybe that being in the trees, is a way of being closer to what one lives on the ground.

Yes, because there's this distance, it's a place where you can see better.

If there hadn't been any trees around him, what would this young boy have done after having refused to eat his snails?

That is the problem. I chose this image of trees in an imaginary country filled with trees because it helped me to imagine this escape. But it's not an escape, this position of solitude is also one of participation. Well, this image has a purpose because another one isn't worth one where you're living in the trees.

I'll ask again: what would have happened if there weren't any trees? What would he have done? He would have indeed done something since he initially didn't want to eat his snails.

Well, he would have chosen some other form of rebellion that wasn't a way of cutting off all contact...

No, no. That's a way of completely cutting off communication.

Would he have planted trees? Ok. The Baron in the Trees is the second part of a trilogy, isn't it? The first part was The Cloven Viscount and the third is The Nonexistent Knight, which was published in Italy but hasn't yet been translated into French. Do you mind reminding us about the story of the Cloven Viscount in a few words?

The Cloven Viscount, which has already been translated in France, is the story of a man which takes place in a... it's not exactly precise, but it's in the beginning of the XVIIIth century. During a war, he gets hit in the chest by a cannonball and returns home half of himself.

Cut in half in the direction of...

In length. And he's a mean man, incredibly mean. And afterwards, we learn that he's done good things. It's not him, it's the other.

It's the other half.

It's the other half which also survived. Well, there are tales of these two halves up until the end where there's a duel between the two halves.

The two parts of the viscount. Yes, the two parts. And it leads to unification, the reconstruction of a complete man. And this Nonexistent Knight?

Yes, of the army. And he's a man in his armour, in his perfect armour but when he lifts the visor, there's... there's nothing inside. And it's just an empty armour. But he's a perferct officer.

I think that the idea... You insist on the idea of, one day, combining into one single volume...

Yes, I'm thinking of publishing in Italy the three books which have already had success individually, combining them into one single volume, one single volume like a trilogy. There isn't any... they aren't linked to one another but they were born in the same climate [of division].

Under what title will you combine them?

Well, I was thinking of calling it Our Ancestors. Our Ancestors, it's a sort of family tree of contemporary man.

Which one of these characters do you personally think you descend from most directly?

Do you have a strong desire to live in the trees?

Well, maybe that I live, I live right up there.

In the trees?
(Music)