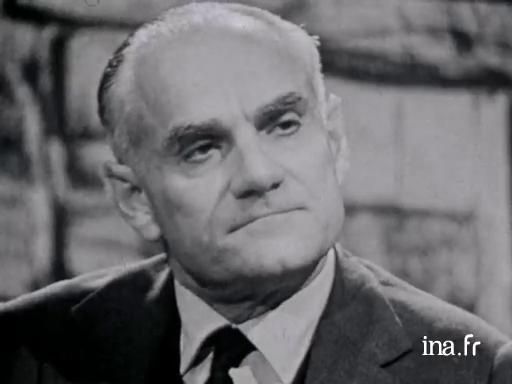 Conversation with Alberto Moravia regarding his latest novel L'Ennui. The author discusses the subject of his book, the impossibility of owning a human being and the incommunicability between two people.

The childhood of Alberto Pincherle (1907-1990), known as Alberto Moravia (borrowed from his paternal grandmother's name), is marked by tuberculosis of the bones and eight years of sanatorium, which he takes advantage of to discover literature and to write Time of Indifference (1929), which critics considered to be one of Europe's first existentialist novels, and which brought him success, but also hostility from the fascist regime.

At first, he preferred to get away from Italy for a while to travel with his first wife, writer Elsa Morante. He came back after having published Le Ambizioni Sbagliate (1935), a censored work that led to him being considered as subversive by the authorities, and he hid in the Romanian countryside where his novels take a more social turn, while his political conscience forms and his relationship with the Communist Party intensifies, since he became their European deputy (Agostino, 1944).

After the war and his blacklisting by the church in 1952, Moravia's work became more psychological, and he revelled in dissecting the morals of Romania's upper class society (The Roman Stories, 1954), love between couples (Conjugal Love and Other Stories (1954), made into a film by Godard) and also the frustration of modern day man in an industrial society governed by money and materialism (Boredom, 1960).

We'll begin with The Ennui by the great Italian novelist, Alberto Moravia. Mr. Moravia, who is this character that is bored?

The character that is bored, is a 35 year old painter, an abstract painter.

And at the same time, a very rich upper class man who has turned his back on money because he's under the impression that money keeps him from working and makes him bored.

He's a furious melancholic, rather, yes.

A bit like the Beatniks, a bit more, a bit less.

A bit like the Beatniks, yes, who wants to live like a bohemian while being very rich, driving in a very old car, while being able to buy a beautiful car all along.

He lives alone in a studio.

What's in the studio next door?

In the studio next door, there's an old 65 year old painter, an erotomaniac who is constantly bringing women over and who, recently, is visited quite often by a young 17 year old girl that smiles in the hallway at the painter, the young painter.

And one day, the old painter dies.

The old painter dies in the arms of the young girl. And right away, she goes to find the young painter in his studio.

This book is about the relationship between this 35 year old man and this young girl. It's a story about love and a story about boredom at the same time, isn't it?

This young girl is called Cecilia. Cecilia bores this painter. Why?

And I must tell you why, at a certain time, she ceases to bore him.

She stops boring him when she starts cheating on him.

She makes him suffer at that time.

So he's under the impression that he doesn't possess her anymore since she's cheating on him. And at that time, he stops being bored and starts to suffer.

What does it mean... What does this suffering teach him?

Why does she refuse?

She doesn't even notice that he tries to possess her because those values through which she could be possessed don't interest her.

What is meant by the relationship between these two humans? The impossibility of possession?

The impossibility of possession from the man's side, and in general, the incommunicability between two people.

You cited a phrase by Proust, earlier. You cited it approximately.

Yes, I think that the phrase, it talks about possession and in parentheses, he adds: "In reality, we never possess anyone".

What, then, is boredom? It's the understanding that you can't possess someone?

Boredom is the understanding that you can't possess someone through the typical means of possession.

As long as we consider the person as an object, for example?

Because he loves her. That is to say, he wants to possess her so he asks questions. Knowledge is also a form of possession.

Asking questions, that helps to possess?

Yes, if you can block someone in something that they cannot escape through a moral judgement, an accusation, a reconstruction of an action, something that blocks the person.

You ask a lot of questions.

Yes, in real life. Sometimes I've asked hundreds of questions to people that interested me.

To know and for more than knowing, probably to be able to control them.

And why does the woman always avoid giving a direct answer, in the book of course?

She doesn't give straight answers because, basically, yes, she's an animal, meaning she doesn't answer. She's an animal and at the same time a sort of robot.

But isn't there a solution to this apparently natural need to possess, according to you?

Yes, there is a solution. It's written in the conclusion. The solution, is the renunc...

Of the object and contemplation.

Renunciation of the object?

Yes. You must give up on the object, so you begin to truly love it and then you contemplate it.

To possess, you have to give up on possessing?

Does that seem like a truth to you, personally?

Yes, basically, yes. It's a truth for which I have experience and which I think is valid for others as well.

Practically, what does it mean?

What type of freedom must one accept in this case to...

It's what experience has taught me.

This feeling of boredom, to get back to boredom, does it seem to especially be Italian to you?

No, I think that it's a universal feeling. Boredom, as I said, as I depict it in the book, is being out of touch with reality or incommunicability. But instead it's the modern pain, I think, especially in a world that's industrialised, in the modern industrialised world. I found traces of this boredom, more than traces in America, for example, in the United States. According to my information, we can also find it elsewhere, even in Russia.

Everywhere, yes, anywhere there's industrialised civilisation and what we call technological alienation, meaning alienation due to the fact that man lives in the middle of machines, that he's no longer in contact with nature and he's employed as a means, he's not an end. But of course, it's also a specific case, meaning that you can only describe that which is specific. Art always applies itself to that which is specific. It goes from the specific to the universal.

It's a general novel. Thank you.
(Music)