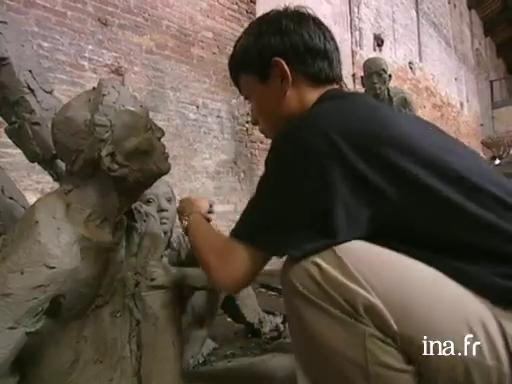 Venice celebrates contemporary art: until November, the greatest artists from all over the world will meet on the edge of the laguna for the highly reputable Biennial. General survey of the artists that are present, with China being honoured this year.

The Biennial of Venice didn't take long, after its creation in April 1895, to become one of the most important international cultural institutions that was devoted to contemporary creation. The artistic celebrations have, from the 1930s, been organised in different sections: the music Festival from 1930, cinema from 1932 (better known under the name Mostra of Venice), theatre in 1934, architecture in 1980, dance in 1999... the first foreign "pavilions" were opened in 1907, on the model of the Universal Exhibitions.

With the exception of the war years (reduced to a few participants after 1939, the biennial was interrupted from 1944 to 1946), the Biennial of art never stopped welcoming more and more artists from around the world. Cézanne, Matisse, Hodler, Van Gogh, Modigliani, Scheile, Klee, Picasso... all saw their work presented in a different pavilion In the 1960s, the biennial celebrated the Pop Art movement: in 1964, Robert Rauschenberg received the prize for the best foreign artist, causing controversy.

Since the 1980s, the programme was designed around a theme. In 1999, directed by Harald Szeemann, the Biennial invested in the Arsenal buildings and proposed installations on the theme of water. Representing France, Louise Bourgeois received that year the Lion d'Or for lifetime achievement. In 2007, the reward was awarded to the Malian photographer Malick Sidibé. European painters, American directors, Asian Plasticien or African photographer: the Biennial is, above all, at the start of the 21st century, the borderless celebration of all kinds of creation.

The meditation of three monks from Tibet, an unusual tribute to Buddha, in this space conceived by a Chinese artist living in Paris, [Shen Zung]. The other surprise awaits the Biennial spectators. The next moment to be immortalised, come sit next to American choreographer Carolyn Carlson to discover an improvised ballet whose theme is water. Slow-motion variations for this element that's vital for mankind and for Venice. The Asian continent is in the spotlight. 17 Chinese artists present at the Biennial. An ironic look, here, at the past. Sculptures reproducing works created 30 years ago, during the Chinese cultural revolution. Further down, this incredible cement mixer made of teak, the crazy creation of a Belgian artist who's gratified to be in Venice.

We have lots of things to see. We're very happy. We can see. The people can look. It's also very eclectic and at the same time, there is something inside that holds it all together.

Just like this patchwork that floats on the water, Venice's Biennial will be a melting pot on a global scale. Over by the Arsenal, the visitors are basking in it and taking walks through superb, renovated buildings. No paintings here. You'll find new types of creations like, for example, this truck dedicated to Kosovo refugees or, in video, soda bottles falling on the ground. One way to illustrate that all paths lead to art.

See what I mean? It was really all about showing people that we can, with today's artists, and with art, make something happy, sad, a big tale, a big tale but one where each person, inside it, is autonomous.

In the most traditional part of the Biennial, each country has its pavilion. A legacy of the universal exhibits of many years past, France presents two artists: Jean Pierre Bertrand and the Chinaman [Ping], a sign that the era of nationalists is over. The borders are being eliminated. Fantasy is emerging. In the Belgian pavilion, come dive in an encircling fog, a walk through padding before reaching the Grand Canal again. Venice also promises to provide you with the pleasure of senses and the taste of magic.