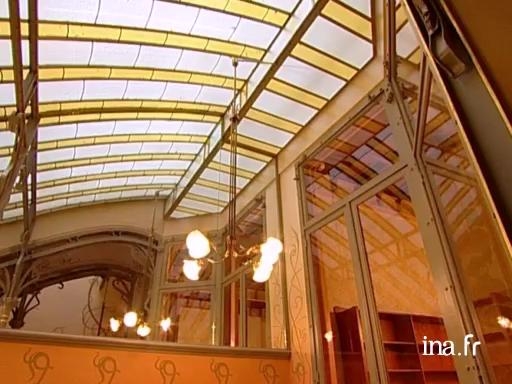 Françoise Aubry, an expert on the architect Victor Horta, shows us Hotel Tassel, the first Art Nouveau building in Europe.

A pioneer of modern architecture, contemporary of Frenchman Hector Guimard, Victor Horta is one of the main figures of Art Nouveau, a movement that frees itself from neoclassic and neo-Gothic heritage to liberate shapes. He began at 12 years old in his artistic career, staying in the Montmartre workshop of Jules Dubuysson. Back in Brussels he collaborated with Alphonse Balat, architect of King Leopold II, with whom he designed the greenhouses of Laeken castle. He then moved on to designing period houses for wealthier clients in new and airy quarters of Brussels.

He supports open plan, fluidity of organised space around the hall and staircases covered with a glass roof. The Hotel Tassel for his photographer and professor friend unveiled the genre. In favour of unique work, fruits of the skilled craftsmen's labours who he works with and with whom he draws out every detail in his work. Horta exploits the dualism of materials, contrasts between stone and metal through which he develops a vocabulary made of curves, a "whiplash" style of stems and folds. Art Nouveau soon lost favour and Horta's works were neglected and then destroyed until the international community rang the alarm and renovated them.

I'm going to take you to the first new art building built in Europe, which is Victor Horta's Tassel hotel. And it's a rare privilege to visit this establishment which isn't usually open to the public.

Françoise Aubry, the great Victor Horta specialist, is opening the doors of the Tassel hotel for us, which is currently occupied by a law office.

My pleasure, you're quite welcome.

For the first time, there was a small revolution here, Victor Horta placed the staircase in the centre of the home. His objective was to make light circulate everywhere.
(Music)

Actually, we have two houses here, one is in front, and the other is in the back. This avoids the need for the traditional hallway. You have a link like a spinal column between the front and the back, which is made up of a staircase, but you don't have the hallway anymore, with its row of pieces. And what is especially revolutionary, is the use of metal in this way. For the first time, new art shines here in all of its coherence, in its entire search for coherence, and instead of having things like we liked them back in the day, for example, a statue here, a candelabrum, that statue of a woman carrying a light, all of this, all of the lines, all of the forms become abstract and we just get a bouquet of electric light bulbs that are like flowers.

Around 1900, people didn't hesitate to show light bulbs, it was the beginning of electricity and of modern comfort. A pioneer, Victor Horta embraced new technologies.

Heaters were below the floor, there was an air intake in the garden, the air passed over a bladed heater and would come out in the octagonal hall. And it was a way of avoiding the big cast iron radiators and providing comfort, once you entered the home, you were enveloped by a warm atmosphere. These are the sorts of technical details that Horta really liked.