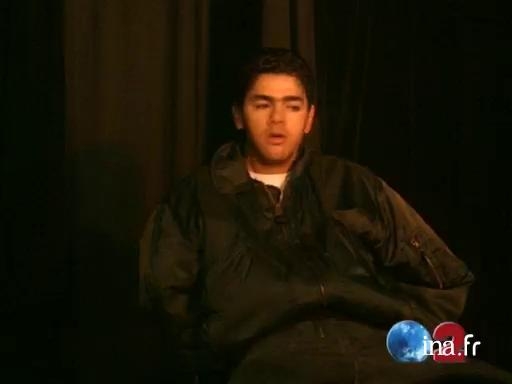 A portrait of Jamel Debbouze for his first show, C'est tout neuf, that he gives at the cafe theatre Le Movies in Paris, at the start of his career. Interview with the comedian mixed with extracts from the show.

Jamel Debbouze, actor, comedian and producer, French-born of Moroccan descent, was born in Paris in 1975. The oldest of a family of six children, he spent some of his childhood in a Parisian suburb called Trappes. As an adolescent he joined the company Déclic Théâtre, with which he made it to the final of the first junior improvisation championship in France. The directors of Radio Nova discovered him on stage in 1995 in his first show,C'est tout neuf, and offered him the chance to present a daily show. The following year he appeared on television for the first time on Paris Première. Noticed by Canal+, in 1996 he joined the programme "Nulle Part Ailleurs" with his sectionLe cinéma de Jamel.

From 1999 to 2003 he played in three one-man shows in Paris and all over France, in Morocco and in Tunisia. At the same time he starred in several films such asAmélie,Asterix and Obelix andAngel-Aby Luc Besson as the leading role. In 2006, in Cannes, he received the interpretation prize for Indigènes with the other male actors from the film, where he was also co-producer. In 2006 he created and performed theJamel Comedy Club, a stand-up show that spawned new talents on the comedy scene, first as a televised show and then on stage in France and Canada. In April 2008, Jamel Debbouze opened his own theatre in Paris, the Comedy Club.

Let's laugh for the next two minutes. Up until now, comedy by what we refer to as "Beurs", or second-generation Africans living in France, was mainly portrayed by Smaïn. Today, we're going to introduce you to a talent from the suburbs, Djamel. He makes fun of himself as well as others. Thierry Hay, Daniel Lefebvre.

Like all journalists, Djamel Debbouze is very excited when he talks about the problems in the suburbs.

Well, yes, the situation is serious, you know. I swear to you that I don't know what to say about them.

There are nevertheless serious problems.

Well yes, but don't get all excited like that.

It's just that me, it hits me right here.

But him, if it really hits home with him, it's because he comes from there, he lives there and will continue to live there. He also wants to build a show around it, but in his way.
(Excerpt from the show)

Twenty years old, a French Moroccan, a paralysed arm from trying to take a train too quickly, a street urchin from the bad neighbourhoods, he started getting up on stage to make fun of the suburbs with the secret hope that they would be understood better.

When people spoke about Paris, for me, Paris was far, it's Mars for me, you know. You have to realise that there are people that come to see me up on stage and who buy their tickets to come see a guy like me on stage, it's incredible for me.
(Excerpt from the show)

A big role in cinema in Morocco, and all of France left to conquer. Djamel has decided to make the suburbs explode, but with laughter. Hatred, he's not familiar with it.