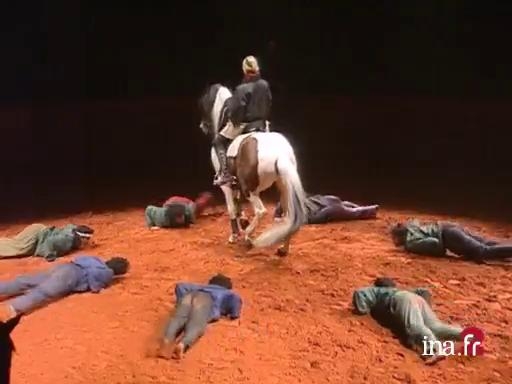 Portrait of the Zingaro circus, led by its creator, Bartabas. The equestrian troupe prepares its next show in Aubervilliers.

One can not disassociate the equestrian theatre Zingaro from its founder Bartabas, equestrian choreographer and rider, born in 1957. At the end of the 1970s, he joined the artistic adventures of two other troupes: The Théâtre Emporté and the Cirque Aligre. Zingaro was noticed at the "Off" Festival in Avignon in its first year, 1984, with his firstEquestrian Cabaret. The show evolved into two other versions played until 1990. The third was scheduled in 1989 at the "In" Festival in Avignon. The same year, the troupe set up in the Aubervilliers fort. It performed in Europe and went to New York for the first time withChimère( created in 1994). The following shows (Eclipse, Triptyk, Loungta, Battuta) received global renown, from Russia to Los Angeles, Istanbul, Tokyo and Hong Kong.

Well beyond the frontiers of classic circus, Zingaro proposed poetic and varied content, filled with diverse music and culture (Asian, Berber, Gypsy), where the horse leads the dance in quasi-symbiosis with man. In 2002, Bartabas created and directed the Academy of Equestrian Shows in Versailles, whose role is the transmission of the equestrian show art.

With our guest Bartabas, we're now going to leave for a magical journey. The world of this creator is a universe where horses have a musical ear.

Bartabas's shows have already been all around the world. Right now, the entire troupe is preparing, in Aubervilliers, the next interior journey that they'll offer to their audiences. Report: Pierre Emmanuel Luneau and Valérie Criton.
(Music)

A king horse surrounded by men demoted to the ranks of insects.
(Music)

And music by Stravinsky, conducted by Pierre Boulez. For this latest creation, called Triptyk, Zingaro places man and animal once again in an astonishing dance of fluidity and mastery. Because in 15 years of existence, Zingaro has become a school of rigour, almost an institution.
(noises)

Based in Aubervilliers, in the Parisian suburbs, the caravans currently welcome around fifty people per year. Two requirements for the troupe: love for horses, of course, but also, one boss only: Bartabas.

We work here, we live here. So, it's a state of mind, we call it the Zingaro spirit. It's... yes, because we live as a community, there are around fifty of us living here so it's really a small private circle and it's really nice.
(Music)

When Zingaro's caravans aren't travelling across the world, it's the world that comes to them. For this new creation, Indians from a martial arts school have joined Bartabas's horses.
(Music)

[English] It's the first time that we work with horses. In the beginning, it wasn't easy, but now, it's alright. Also, we're going to go around the world, and that, that's a good thing for people to know about Kalaripayattu, our martial art.
(Music)

For the first time, the music won't be played live during the show, as was previously the case. The horses will have to adapt to the music and not the other way around. Perhaps the first sign of a finally domesticated Bartabas.
(Music)

Domesticated but not trained, it's not the same thing.