History of the bals musette (dances with accordion music) 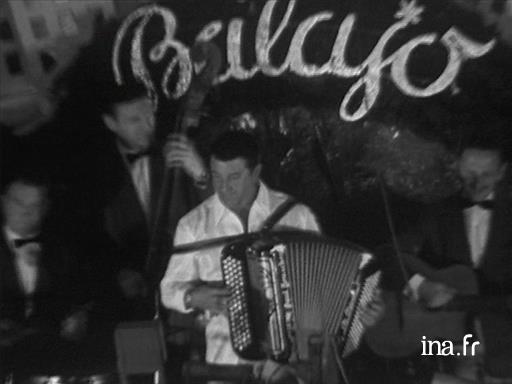 On 14th July, the accordion becomes the king of the party. Celebration of a popular instrument that transcended the ages and crossed borders despite its detractors. Alternating musical archives and interviews with accordion lovers and virtuosos, this document traces the career of this portable piano with straps, from the creation of the accordion to its boom in dance halls located on the rue de Lappe, like the Balajo, or in guinguette taverns on the banks of the Marne.

It would not be possible for a Frenchman to write about the migration of dances without mentioning the «musette» style. The style was born at the beginning of the 20th century when Italians inhabitants of Auvergne arrived in Paris, the bals musette were mainly held on rue de Lappe in the Bastille district. Emile Vacher, who created the Bal musette, first called it bal des «bougnats», who were café owners who sold cold. From the 19th century onwards, we can clearly see the coming together of two types of ballroom dancing and waltzes, performed to the sound of the musette and French and Italian bagpipes. Gradually, the accordion replaced the musette, accompanied with percussion instruments and a double bass, and the usual bourrée dance from Auvergne was dethroned by the waltz once and for all. And the whole of France danced and still dances to the sound of the accordion which became a very French emblem, with renowned artists such as those cited in the video clip.

In the musette style, couples danced tightly together, probably because the halls, despite their abundance in the district, were rather cramped. It should be noted here that the waltz (with its signature of 2x 3 steps in triple time x 2) also had to evolve: the characteristic strides of the Viennese balls were replaced by very small steps on the same spot. But, as heard in the report on the debutantes ball in Vienna, musette couples added a second difficulty in addition to the narrowness of the halls, i.e. the sense of rotation: they danced the other way round", i.e. to the left. Why? It is a way to show greater skill than that possessed by the general public, because the sense of rotation to the left is much more difficult on a dance floor where the couples themselves are moving anti-clockwise around the room, i.e. to the left. A real challenge! Each rotation is actually greater than 360°.

But there is another facet to the choreography that characterizes the valse musette: the famous «toupie» (spinning top), which was another consequence of the lack of room on the crowded dance floor (as was the case for rock, which was automatically danced 'in a line' in the basements of Saint-Germain-des-Prés at the time). For the toupie, you have to dance quickly of course, to the left, i.e. the most difficult direction, but moving as little as possible. The feet are constantly sliding across the floor, and are only really pressed against the ground on the third step. This produces a fascinating dissolve when you see the couples. The dancers' arms, which are kept by their sides to save space, are skillfully opened out in-between the other couples. Obviously, there were competitions for this practice, the best of the best could dance on a table! Apparently!

But in bal musette, there was also java, an offshoot of the mazurka (both in triple time, but with three steps in the java, and two in the mazurka). From a musical standpoint, we once again find an ingenious mixing of styles: what musicians call "triple time division", which comes from the swing. The waltz can easily be written in triple time, and possibly divided into half-time. The java is written in the same way, but it is supposed to be played differently, with triolets. Here is a pictorial representation:

It is thanks to these triolets that dancers recognize the java when they hear it. In this respect, it should be noted that the famous java blue is not really a java at all, but a simple and beautiful waltz.

The bal musette (the accordion ball) was born in the Bastille district, in Paris The name of a famous street is all what is left of this time where the temple to this form of dance can be found.
(Music)

I lived like a small free child.in this street full of music, and full of light, And I pressed my nose against the windows of all the bals musettes, and I watched the Apaches dancing with their giguelettes to the sound of the accordion, it was wonderful.
(Music)

When I knew the rue de Lappe, there were seven balls. There was the Boule Rouge, the Bousca, there was the Auvergnat, and the Musette. So, the girls were there, almost Well P, as they say, downstairs with their garters and their suits, eh. There were no, nothing, huh. But we were the bouncers, whenever there was a girl who was being excited a little too much against her wishes, she called us, and then we kicked the man out. There was never any police, not once.
(Music)

We knew that the people who hung around the la rue of Lappe were up to no good, they didn’t try to hide. There are so many others who hid though. It was sure that the riffraff who came or the pimps who were there had not come to dance in a tearoom, you understand? They were on their way to the Champs Elysees to.. And then, there were old folks’ clubs, where old people went to dance, where there were young blokes who we called the sandwich blokes. they invited old women to dance so they could pay for something to eat, a sandwich.
(Music)

It would also be impossible to talk about the history of the accordion without mentioning the Balajo. Well, the balajo, first, was a symbol of the musette, and then the riffraff and their girls came to jig about, doing the waltz backwards and the java.
(Music)

At the Balajo, the tables and stools were bolted onto the ground to prevent any brawls from getting out of hand.
(Music)

So, between the rue au Maire and the rue des Vertus... The rue des Vertus, talk about a name, there were only whores, it's rather amusing as a name! It was a bit of a stretch. It was pretty much the same clientele that lurked about there, it was the same punters who came.
(Music)

Well, I must admit that I liked that environment, as I was born in a district of Ménilmontant, which was full of ruffians and troublemakers, well, I’m not going to deny my roots, you understand. I enjoyed it, and I was able to chat with these bad boys, rather than talking from a nobody who worked at Renault, who after doing 10 hours a day, had nothing to say, you understand.
(Music)

About his history, he said that he had been raised in a brothel by his aunt, a brothel in Belleville, and that his aunt had given him his first accordion.

I am not going to resort to subterfuge and call it a maison de tolérance or a house of assignation, it was a brothel, well a little, call it what you like. And then, there was this one client who went there all the time, his name was Emile Vacher, who was the king, the precursor of all the bals musettes, who had a really big rating at the time. But he was a big star, you see, like now, if he were alive today he would have posters and he would have his own personal plane. So, my aunt made me go for an audition. And when he heard me play, Vacher said, shit, it's really a shame that this kid only plays in people’s courtyards and in restaurants. He took me on as a partner.
(Music)

He became the accordionist for the gypsies when there was a party, people wanted to see Jo Privat - the travelling people liked him because he didn’t turn them away. You could really make music with these people, very pleasant music, either European jazz or French jazz.
(Music)
(Noise)
(Music)

With an accordion, une valse musette, a bord de Marne wine, a good fry-up, there we were in the world of the guinguettes, (open-air restaurants with a dance floor)
(Music)

In guinguettes called the Canotier, Petit Robinson, and Chez Gégène, it was here that the crowd danced to the greatest accordionists on Saturday nights and Sunday afternoons.
(Music)

Today, the guinguettes have regained their old colors. At the Martin Pêcheur, for example, generations succeed one another and socialize with each other with the same fervour. It is not an obligation to know how to dance; the most important thing is to have fun, because as Jo Privat says, the guinguette is an art of living!
(Music)

well, the guinguettes, today, should be reimbursed by the NHS, because people, when they come out of there, forgive me for saying so, they are so dumb.
(Music)

The guinguettes, which are firmly fixed in the heart of Parisians, first appeared at the beginning of the century. Workers and employees came to enjoy a well-earned rest at the end of the week. This time will continue to be engraved in our memory thanks to this fine team composed of Gabin, Vanel, and Viviane Romance, who make us dream of bucolic weekends as we walk along the water's edge.
(Music)

At weekends, it was a working class clientele that came from everywhere, on weekdays and in the afternoon, there were a lot of gentlemen, each accompanied by several ladies who were having a little rest from their nocturnal activities, if you see what I mean. These “ladies” mainly danced with each other, because the men got very jealous. The men played cards.

The customers followed the pace set by the accordionist. You see, there were people who were addicted to the valse à musette, it was like being injected with champagne intravenously.
(Music)