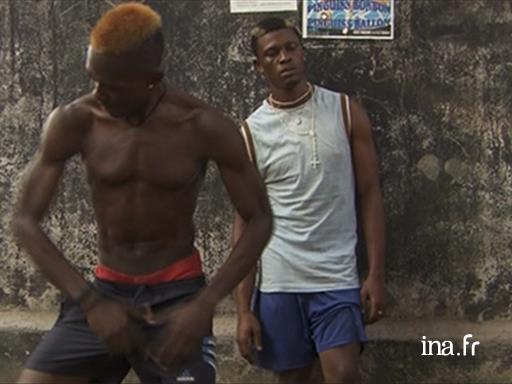 Report made in Douala in Cameroon, Paris and Sarcelles focusing on the phenomenon of the Pinguiss dance, which is electrifying Cameroonian clubs.

Commentary on real images and extracts from a clip alternated with an interview with Daniel, the Cameroonian inventor of this dance, and dancers...

It was Daniel Baka'a who invented the Pinguiss, a dance that is as unusual as it is energetic. Energetic because the 'Pinguiss' is practically danced on one leg.

The dancer must hop on one leg, spin around and go in all directions: forwards,

backwards, sidewards, and so on...

Pinguiss is a choreographic and musical movement that appeared in Cameroon at the end of 2010 with the release of an eponymous album by Daniel Anatole Mbaka Wassi, also known as Daniel Bakka or Daniel Pinguiss. A single song, also called Pinguiss, was enough to firmly establish the choreographic concept and launch a trend that would quickly be adopted by Cameroonian communities living abroad.
Thomas Jacques Le Seigneur

This story begins in the nightclubs of Douala, it is the story of a young man who dreamed of becoming a star, and he managed it. Daniel Baka'a invented Pinguiss,. a dance that is all the rage in the whole country. His dreams were so big that he found himself at the foot of the Eiffel Tower.

We do it, like that, like villagers who have just arrived. There is nobody in the world who will tell you that they have never dreamed of seeing something like that. I, myself, have always dreamed of seeing it and now I’m standing in front of it, I am really moved. Patricia, I'll introduce you to my manager [...] and also [..].

He is very famous in Cameroon, you know, in Cameroon and throughout Africa. People love him. They applaud him everywhere. Baka’a, Baka’a. Because he created something fantastic. To dance his dance, you really have to be fit. Because you dance on a single leg. Like this. Hopping. Like this.
(Silence)

It was time to go to Paris.
(Music)

Paris was doing his show, Daniel’s show would soon be starting, and it was his first concert in France, It was being performed in Sarcelles.
(Silence)

A Cameroonian journalist was doing the crane’s foot outside, clearly, he did not want to miss the arrival of the star.

Why does it work, Perhaps because of the simplicity of the artist, maybe because of that. and look who’s arriving. are you not afraid of becoming a little big-headed.

No, no. Here in Europe they only know me now. But in Africa, in Cameroon, I’ve been at the top of the top for a year already.
(Music)

Over there, everyone danced well. The Cameroonians in Sarcelles were delighted, but Daniel himself wasn’t.
(Silence)

He had already left for home, to Douala, a few days ago, but he had still not got over his disappointment.

[..] say that I was good. It’s just that in fact I didn’t have any dancers. Because my dancers couldn’t get a visa to come to Europe, to stay with me, and the whole world knows it, those who are interested in Pinguiss. Pinguiss is nothing without dancers.
(Music)

They do at the end of a lane in Douala, and it’s like that every afternoon.
(Music)

There are a dozen boys. Pinguiss is their whole life. And they do nothing else. They are Daniel Baka'a’s dancers; without them he is nothing.
(Music)

Have you spent a long time working on this choreography.

But what do you do to be able to dance so well without ever having learned to dance?
(Silence)

And yes. Lots of work, again and again. Because all of these boys have never had any money, just a huge desire to dance and to have an easier life thanks to dancing.
(Music)

They stopped for barely a few moments, just the time it took them to catch their breath and to change skin. Because, to earn a living from their music, they can't stop at dancing, they also have to sell.

We are now trying to sell CDs because there is a new album,. Pinguiss bonbon and Pinguiss ballon. So we have to try as hard as we can to make the CDs available to all Cameroonians, before people start pirating them.
(Music)

A week and not one day more, they know that this is all the time they have to save their new album. In a week, we will not be able to sell it at the price it cost to make them.
(Noise)

With bootleggers today. We release the original CD. They buy it, they copy it to sell it. Their product is not as well finished. But they sell it much cheaper. We crossed the road.

What he wants, is for the second album to be as successful as the first. Last year, he toured everywhere non-stop.

Pinguiss. We just love it! I like dancing. I need it to keep fit. To be a good dancer. He is the best in Douala, the best in Cameroon.
(Noise)

He is good, he is a really good singer. We should encourage him.
(Music)

You are listening to Cameroon radio, we are coming to you from the banks of the Wouri, it is 9:30 in Douala, as we have already announced to our listeners, there will be a little surprise: With us in the studio, we will be welcoming Daniel Baka'a, and it is true, there is no stopping him since the release of his album and...
(Silence)

It is Friday evening, in Douala the clubs are filling up, It’s time for the .

Everyone can identify with Pinguiss, simply because it's a rhythm that comes from a mix of rhythms from all regions of Cameroon.
(Music)

To dance the ping there are no rules you have to follow. No steps you have to respect. Just follow the beat and use your feet. You can do what you want, and that’s what people like about it.
(Music)

What will the boys be having to eat today?

Every day except Sundays. They are nice, we get on.

Who is your favorite?

Raoul is my favorite.

It is very good food. She is used to cooking. She is a good cook. We like her.

This small house is not only used as a rehearsal room. The all live there together.

We manage to create, to devise coupés and moves, and make things, that don’t exist already. First of all, nobody is from a well-off family. on the island. We talk about it in the music. Some of us lost their parents early, like me. Today I have a spiritual daddy, Daniel. So he took me like that, he helps me to grow.

It is this love that drives us, and then it also means that we are always together, on a daily basis.
(Music)

You have to hurry to get to the other end of the city, people are expecting you. Daniel is already there. Today we are performing.
(Music)

What the song says is that boys shouldn’t all imagine that they will become famous footballers.
(Music)

For the filming of the last clip,. the producer chose this block of building.

It’s like a monument for us. So apart from this block, there is nothing really pretty, the houses are all made of boards. So it's the only thing that looks modern to us. Rather than be in a suburb, this a luxurious place. We know that the people who live there are wealthy people, there’s no doubt about it. You know Daniel is someone who is from a difficult neighbourhood. It has to make it to the top, climb to the top.
(Music)

In the small house at the end of the alley; their bags were already packed.
(Music)

A half-day’s journey in the same bus as everyone else. On the other side of the country, other fans were waiting for them.
(Music)

With Pinguiss, when you hop, it warms you up, and it feels good.

I like it because the moves are unique.
(Music)

To come so far, it's a lot of fun, but it hasn’t been easy. There is no big record company backing Daniel Baka'a and his dancers. There are no producers.
(Silence)

The next day, there was no lie-in for Daniel, who was already somewhere else for another concert ahead of the promotion caravan, They seem happy, the penniless young boy had moved over into another world.

I feel as if I was a president of the Republic.
(Silence)

If someone had told him that barely a year ago, Daniel, maybe he wouldn’t have believed it, but today he savours every moment.
(Silence)