Another suburb, another time 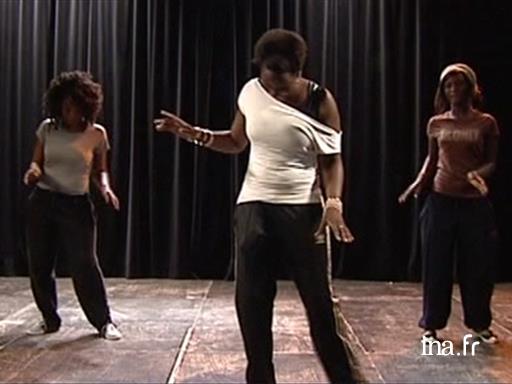 Story about the Dervallieres district in Nantes. In Nantes, more than 25 nationalities rub shoulders every day. Like so many others, Guapo, Mariama and Mama are the offspring of immigrants. Perfectly integrated in the district, they retain the values and traditions of their African community. Guapo, Mariama and Mama have known each other since infant school. Their friendship is above all a story about land and maternal roots. They have got to know the district, they have their own routines. Together they created "Black Diamond", an African dance group. Tossed about between two completely different worlds, these three grinning girls have found their place in society and their own identity. Proud to be French, and also proud of their little piece of Africa.

Another suburb, another era.

The Dervallieres district was built in the 1950s to alleviate the housing shortage in a fast-growing conurbation. As early as 1959, this new suburb was home to a working population who could enjoy the comfort and the new standards of "modern life" offered by a growing national economy. But the economic crisis struck and for the city's inhabitants this meant unemployment, impoverishment, and even social marginalization and exclusion. Urban planning projects were implemented in the 1990s to enhance this district, considered by institutions to be a «sensitive» area. But they did not manage to prevent Dervallieres from falling victim to the 2005 suburban riots, which were an alarm call from these underserved populations. The issue of this urban violence, and the solutions that were discussed in public debates, went beyond mere economic considerations, and ended up focusing on cultural and identity issues that called into question the French cultural and social model.

Who were these forgotten suburban youths, the offspring of economic migration in the second half of the 20th century?

These three young French girls, originating from various countries in sub-Saharan Africa, formulated an initial answer to this question. Living a modest existence in an urban environment deemed «difficult» - although they were born in France and educated by its institutions - they inherited and even simultaneously cultivated another cultural heritage, that of Mali, Guinea, or Senegal... This in-between world lifestyle, seen as a failure by proponents of the traditional French integrationist model, is simply the expression of a evolving society, its people and the social and cultural definitions that shape it. These French girls, at the same time African and European, cultivate their origins, their daily lives shared with other individuals, and their dreams of distant horizons, to enjoy a new, plurinational, identity in France, in phase with their globalized lives. And when it is time to express this identity with their bodies, the dance they perform is the Coupé Décalé: an Ivory-Coast style dance, created in Paris, reclaimed by Ivory Coast,and which spread throughout French-speaking Africa, to then be carried by the country's migrants. This incarnation of a new African-French identity is that of a new generation that dances and sings. It takes inspiration from France and promotes a transnational Afropop with the help of a myriad of groups (La Saomera, Afrik angels, and Angelo Capitaine...)

They were born in Nantes, on the Dervallieres estate, but their heart is entirely devoted to this distant continent, Africa. Their parents grew up there, they dream of spending their old age there. On the second floor, the flat is modestly furnished. Founé lives there with her mother and her younger sisters; in the flat, everything is reminiscent of their homeland.

So, what do we say, what advice do we give to our children: not to steal, not to lie...

And it is a real blessing at the same time!

Ah yes, having a duel culture is a real blessing, that's for sure!

In fact, our parents always told us about the cultures in Guinea. So, that's why in fact, we are lucky to have a dual culture, because our parents, showed us the lifestyles that they had when they were there. But as you cannot do everything as they do in Africa, so, you have to adapt.
(Music)

Founé, Mariama and Mama have known each other since infant school. Their friendship above all is based on a history of land, of their mother’s roots . They have got used to living in their district, they have their habits, they know where things are, even if they don’t go out as much as in the past.
(Music)
(Noise)

It’s nothing unusual, girls don’t hang around in the neighbourhood. But it is the truth, you have to stop doing it. The neighborhood is not a safe place for girls.

At times, people go a little mad, but nothing worse than that. It can't be there all the time, you sit with them for a bit, you say hello, thats all.

Together they created Diamants Noirs, an African dance group, and they rehearse every week.
(Music)

Since we were small, we have always done that together, well, now that we’re older, we are still together and we like dancing together.

It is cultural too, because your moms, do they dance?

Yes, they dance all the time.

They like it, it is a cultural transferral as well, it is the joy of living, a way of expressing what they feel through dance. It helps to let of steam, it’s good.

Bobbing about between two worlds that are so different, these cheerful girls have found their place and their identity, proud to be French, proud of their little piece of Africa.
(Music)