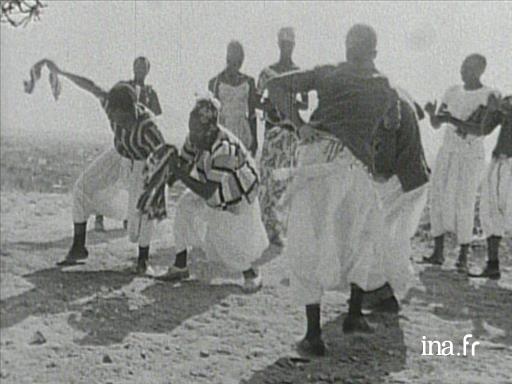 Extract of a documentary dealing with the situation of immigrants from Senegal, Mali and Mauritania who came to work in Paris. To escape their harsh living conditions, in their homes located in the suburbs to the east of the capital, they get together, talk about their experiences, and try, as they say "to forget about their hardships through dance".

In 1967, Africa was no longer French, but France discovered this African France that had established itself in its suburbs.

At this time, the crisis had not yet shown its head, French migration policies encouraged the influx of cheap and under-qualified African migrants to satisfy the industrial needs of the French economy, which was happily experiencing the Trente Glorieuses. While the mainland institutions saw these populations as French a few years earlier, they now regarded them as a temporary workforce that would soon be returning home. In 1967, there were more than 60,000 immigrants working in Paris, Marseilles and Bordeaux. A minority that was hardly invisible and which were piled into housing that had become insalubrious.

This first generation of economic migrants to come from sub-Saharan Africa in the 1960s were just as convinced that it was only a temporary arrangement. They generally had heard stories told to them by their elders or followed in their footsteps, elders who had twice come to help a colonial power that had fallen into the clutches of the enemy. The promise of getting rich quick in a fast-growing Europe and the euphoria of independence in Africa fueled their hopes of a rapid return to their homeland.

But the reality once they arrived in France was quite different. Illiteracy, a lack of qualifications, and a changing industrial demand meant that the majority of these newcomers could not find jobs, and lived thanks to the solidarity shown by their communities. Migrants who had only come for economic reasons had to gradually adjust to a new cultural environment: learn a new language, understand the usual practices of an industrial economy, of a capitalist society, and live as Westerners... This loss of spatial, social, and cultural habits experienced by the migrants, heightened the need to withdraw into a familiar environment, that of their own community. By reproducing cultural, artistic and social practices, the migrants slowly recreated the world they had left behind. The first images show men and women performing a dance from West Africa (some of the steps are reminiscent of the Pinguiss leg dance), accompanied by their country's traditional instruments and clothing in a settings that we can presume to be Parc Beaumont, in Montreuil. This new contextualization allowed migrants, as explained by Dioncounda Bathily, to cope with the reality of their new environment.

This documentary, one of the first of its kind, was produced in 1967 while the black civil rights movement was reaching a climax on the other side of the Atlantic. It came after a scandal where certain Parisian bars had refused to serve «coloured» customers. French opinion woke up to their «own» Africa in the suburbs, which they could no longer ignore. How should they consider these recent immigrant populations who could end up living much longer in an increasingly hostile France?

After a hard day’s or a hard work’s week, trying to perform such dances again as you can see is very difficult. But with the determination to make a name for ourselves and to find our Africa, the Africa where we came from - we are so far away-, gives us the courage to dance. When we dance, we immediately feel like we are in Africa, and we dance to forget many of our difficulties and our worries.
(Music)

The African workers that you meet in the Paris region - there are between 16 and 18000 of them, 30000 in the whole of France, are actually from Mali, Mauritania and Senegal, and mainly from a part of Senegal where you meet many Sarakolés (aka Soninke). In fact, most of them are Sarakolés, Tukulors, Peulhs and Bambara. Our department deals with all these workers, and its activities relate to the triptych: protection, prevention and, if needed, of course, repression, which is part of the Head of Police’s general mission.
(Music)

What shocks Africans the most when they arrive in France is the total loss of community life like they used to enjoy it in their village.

When I saw everyone just going about their daily business, friends who walk past each other without shaking hands or going up to the other person to shake hands.
(Music)

You see the truck, we’re arriving in Paris, we’re slowing down.

All of a sudden, he came full face with the Western world. This country where one does not stop to wish someone good morning, where people don’t look out for other people’s children as if they were their own. Where white-haired men must work in factories to make a living because their children no longer respect their elders. He must face this country without the proper transition.
(Music)

Isolated, lost, the migrant holds, in his hands, the letter from his big brother who made it possible for him to come.
(Music)

This new civilization, the African newcomer does not understand the signs or the interpretations. It represents a choice that he will never have time to make during the two or three years he will be staying. For him, the city of light, the France that his elders speak about with so much pride will be a maze of outdated streets in the industrial suburb in northeastern Paris.
(Music)

To survive isolation, the hostility of this unknown world, he will reinvent the nostalgic Africa of the suburbs at the back of a hangar in Saint-Denis, in a backstreet in Montreuil. Like on the village’s cora, community leaders speak their ancestral wisdom in local languages.

When a man travels, he is bound to see everything. We come from far away, we are like fish out of water; the French know that we are not alike. But basically, we are all the same, especially since we are in their country. We are in the minority and we are absorbed by the French population. If they could just understand that we are all the same, that we are human being, it was his one wish. But alas, we are bound to be subjected to a lot of things, a lot of injustice.

Anyone who travels is bound to see a lot of things; it was enough for Doumba Bongo to put on his traditional costume, take the subway with his brothers, to be able to experience his first lesson in social life.

So now, the laughs, frankly, it wasn’t appropriate. His friends were forced to react. So now, they said they looked like monkeys with clothes on, their clothes weren’t right at all. Well, what shocked me, was that they exploded with laughter, it was a mocking laugh,you could feel it. So we immediately knew that it was racial discrimination by another name, it was because we were black. So, we immediately asked for an explanation. Then, they told us that at one point, they are, as they said, monkeys with clothes on; they are Negroes! So I know it doesn’t matter what they say, we are not the same. Then, they say we are disgusting and tell us not to sit anywhere near them, because we are dirty. We replied sir, do not say that we are dirty, but quite simply it is because we don’t have the same upbringing. We don’t find you very polite either. Look, you sit with girls, you kiss. That is not proper. In our country, we don’t do such things. Well, we cannot hold a grudge because they don't have the same civilization. While, for example, in France, men and women eat together at the same table, while in my country, it is not the same. Well, they find, these men thought it was not proper to eat with your fingers. Well, they, too, they cannot understand, they think that a Frenchman has a dirty mouth. Then, there are those who say we are illiterate, it is very difficult for us to live in France and find work quickly.

Another suburb, another time