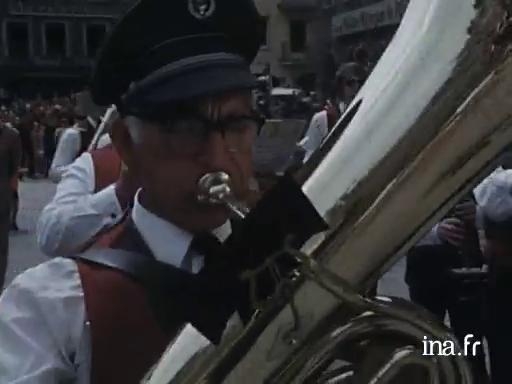 Dance procession of the Saint-Guy at Echternach, in Luxembourg.

A pagan legend of the VIIIth century talks about how Guy le Long, "a violinist from Echternach" left for a Holy Land pilgrimage with his wife. When he came back alone, malicious gossip suggested that he had killed his wife. Judged and condemned to death, Guy le Long requested his majesty the king the right to play one final tune, which was granted to him. Drunk with joy at the sound of his violin, the crowd danced all around him and ended up grounding themselves in the soil. Only the intervention of Saint Willibrord was able to break the evil spell of "Guy's dance" and allow the inhabitants to regain their freedom. Meanwhile, Guy le Long had disappeared!

Enlisted in the religious tradition, the dancing procession quickly became a tradition that was repeated over the years, every Whit Tuesday of the year by the Echternach inhabitants, who gradually forgot about the origins of this custom. Two steps to the left, then two steps to the right: the dancers line up, connected by handkerchiefs, proceeding with the steps according to the rhythm of the orchestra's melodies.

Sir, what is the name of this procession?

Its name, it's Saint Willibrord's procession. Saint Willibrord, he was the founder of an abbey here. He came from England, in the 5th century, and founded the abbey here, and Christianised that area over there, Echternach, and the entire region of central Europe, I think, yes, that region, yes.
(Music)

What do you expect from this procession?

How long does the procession last?

I think 4 hours over 9 kilometres, and you might find 70,000 visitors here and 2 or 3000 people marching on the road of the procession, this procession here.
(Music)

Mr. Deputy, why are you participating in this procession?

You know, it's thanks to a chair that I had in my town, at the Vianden city hall, now at the Vianden church. There, we had a bet, that I participated in so now, I must take part in the procession here. But, otherwise, it's fun because there are lots of people here. And I'm committed to keeping my promise that I would participate in this dancing procession.

What is this chair story all about?

There is the burgomaster of the city of Vianden, he supposedly stole the chair here, in the city of Echternach. So now, to make up for his misdeed, he promised to come here, to Echternach, with his entire team and his music.

How old are you, sir?

How long have you been taking part in this procession?

You started at the age of 4?

Why are you participating in this procession?

It's... We listen to the music and we're going to dance.
(Music)